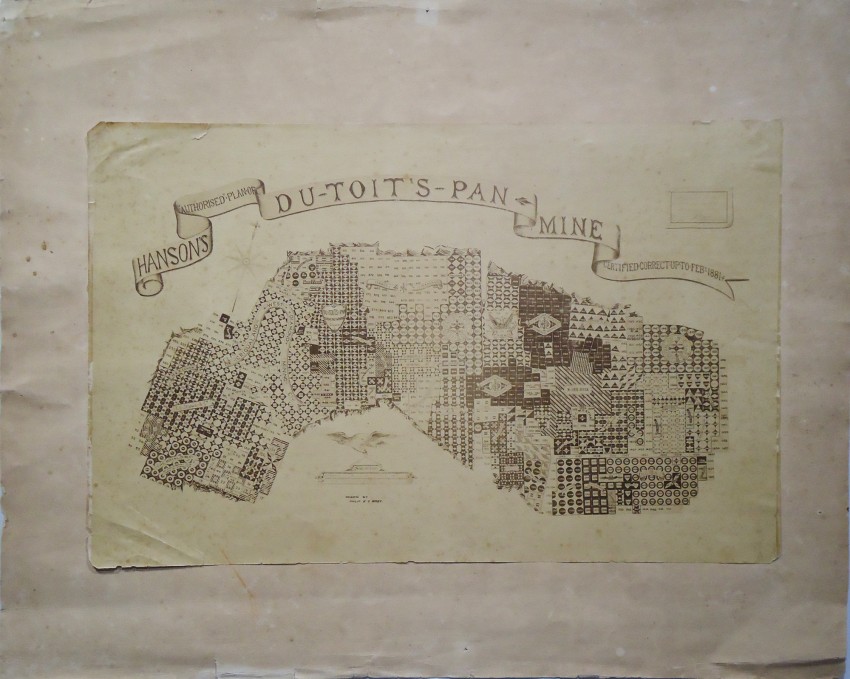 Certified correct up to Feb 1881. Drawn by Philip B.S. Wrey.

290 x 450 mm, photographically reproduced (an albumen print) and mounted on card, faded, details the consolidation of the mine up to February 1880 with all the individual claims and mining companies named, a good copy.

Du Toitspan Mine This was the first of the Kimberley diamond mines to be discovered named such because the farm Dorstfontein originally belonged to Abraham Paulus du Toit, who had built a small house next door to the Pan, a basin shaped like a saucepan that holds water. It was named Du Toit’s Pan for obvious reasons. Du Toit sold the farm to a Mr. Geyer for £525 on 12 May 1865, and he in turn sold it to Adriaan J. van Wyk for £870 on 6 January 1869. At the time of the discovery the owner was Adriaan J. van Wyk who tried his best to sell his farm towards the end of 1870, even placing advertisements in newspapers proclaiming the value of the land. "For more than six months people have been digging..." stated one such advertisement, and the "...weekly finds average 60 - 100 diamonds..."

On 11 March 1871 the Du Toitspan farm was sold to Lilienfeld, Webb and partners (the London and South African Exploration Company) for £2600. The diamond controversy that followed and the Keate Award verdict of 1871 led to the annexation of the farms from the Orange Free State which became part of Griqualand West, which in turn was absorbed into the Cape Colony as from 1880.

For a more detailed description of the early history of the mine see: https://www.kimberley.org.za/discovery-of-the-mines-du-toitspan/

Wrey, Sir Philip Bourchier Sherard (mining engineering, forestry) 28 June 1858 - 8 May 1936. He came to the Cape Colony, working as a mining engineer in Kimberley during 1880-1881. In 1883 he passed the Survey Certificate examination of the University of the Cape of Good Hope. From 1883 to 1885 he was employed by the Cape government to survey and report on the Walfish Bay territory, though he was admitted as a land surveyor only in the latter year. https://www.s2a3.org.za/bio/Biograph_final.php?serial=3198