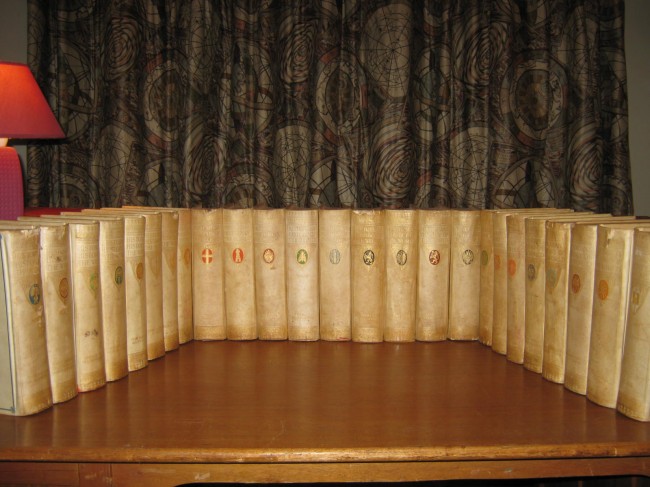 " . . . A comprehensive narrative of the rise and development of nations as recorded by the great writers of all ages . . . With the collaboration of many specialists and with contributions by [more than thirty academics and editors from around the world]"

Although very different to today's world histories - examples: Ireland, India, Australia, New Zealand, South Africa and Canada are all included in the British Empire; and very little on the rest of Africa and most modern Asian countries - these volumes remain both readable and instructive, especially with the help of the full volume of indexes.

This is the full-bound white vellum or parchment edition, which features a different multi-colour-embossed design on each upper panel and spine (see images). The endpapers are plain. The set has more than 16,000 pages, including indexes; more than 150 plates and more than 2000 other illustrations in the text. There is a tissue-protected frontispiece in each volume, with all tissues undamaged and in place. The top page edges are gilt, the bottom edges untrimmed. The set is complete and without ownership or other marks.

CONDITION NOTES. The binding is sound throughout, with most of the covers unmarked, unrubbed and unchipped. Although the binding material (vellum) has become brittle with age, there is little damage, although some volumes have spines chipped at the head or the back. There are a few cracks at the endpapers and between sections, but the hinges are firm. The endpapers are sunned and the early and late pages of nearly all the volumes are foxed. These are small reservations, however, and, as is clear from the next paragraph, the set remains attractive.

IMAGES. Most of these show the volumes on bookshelves, the 25 front covers in one image, enlargements of the front cover embossed designs, one for each volume, the spines for 5 volumes at a time - 1-5, 6-10 etc - and the bottom edges. It is clear from these images that this set remains in nearly very good condition overall.

Indeed, sets that are complete and unmarked and in a similar overall condition remain difficult to find.