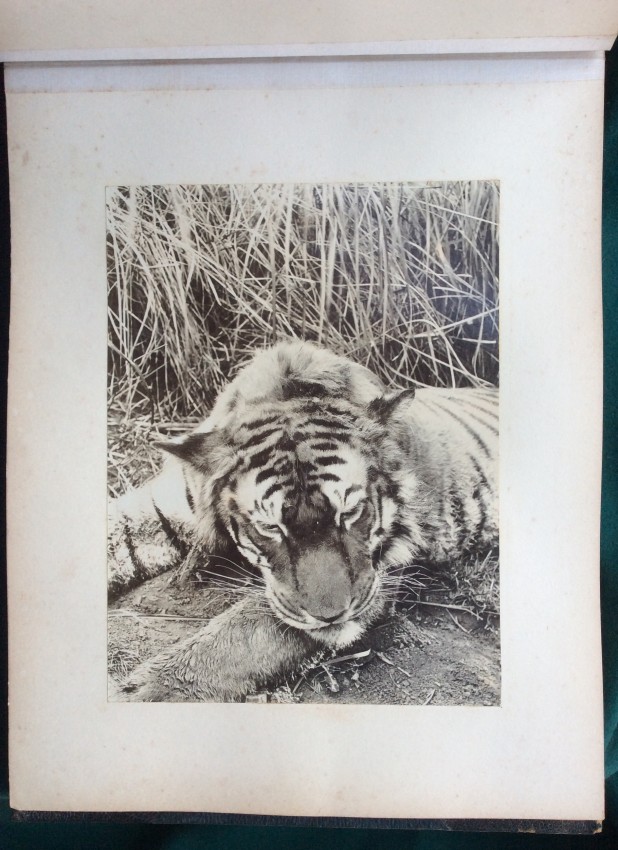 [INDIA] An album of 43 mounted photographs, the majority of Big Game shot by Howard-Bury.

Original green half morocco over green cloth, gilt tooling and gilded edges to the card leaves.

A fascinating album, the majority of post-mortem photographs of Big Game shot by Howard-Bury, including 22 of big cats.

Charles Howard-Bury “was born at Charleville Castle, King’s County, Ireland, the only son of Captain Kenneth Howard-Bury (1846–1885)….. His mother was Lady Emily Alfreda Julia, daughter of Charles Bury, 3rd Earl of Charleville. His father had assumed the additional surname of Bury in 1881 after his wife succeeded to the Charleville estates…

Howard-Bury was always interested in climbing as a youth, which led him to take up the larger routes in the Austrian Alps. He joined the King’s Royal Rifle Corps in 1904 and was posted to India, where he went travelling and big game-hunting [see the present album]. In 1905 he secretly entered Tibet without permission and was rebuked by Lord Curzon. His early travel diaries date from 1906 and show his keen powers of observation, encyclopaedic knowledge of natural history, and linguistic ability. At the beginning of World War I, Howard-Bury rejoined his regiment and served with distinction as a frontline officer on the Somme and throughout the conflict. …

At the behest of Sir Francis Younghusband in 1920, Howard-Bury successfully paved the way for the Everest Expedition. In 1921 he was the leader of the Mount Everest Reconnaissance Expedition, …. In 1922 he wrote a full account of the expedition, published as "Mount Everest The Reconnaissance, 1921"  … He was awarded the 1922 Founder’s Gold Medal of the Royal Geographical Society for his leadership of the expedition” (Wikipedia).