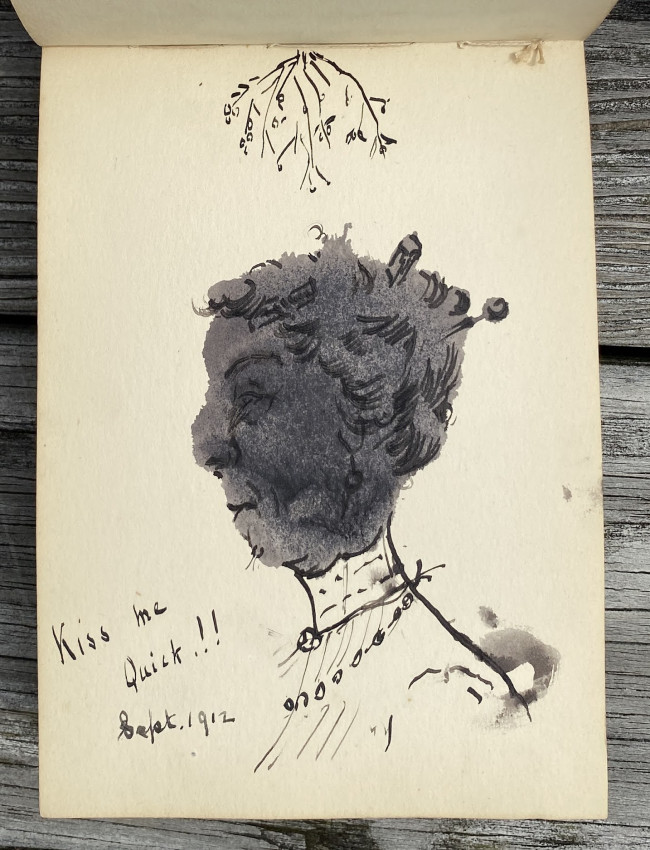 [IRISH Upper Class: an Ink Blot Album with 142 entries by members of the anglo-Irish ruling elite].

A highly unusual friendship album, in which E.M. Riall (probably Edith Riall), uses a version of the game of Gobolinks

A highly unusual friendship album, in which E.M. Riall (probably Edith Riall), uses a version of the game of Gobolinks to gather the signatures of friends and relatives, whilst also testing their wit and imaginations.

The present album differs from Gobolinks in a couple of major ways: the ink blots are never symmetrical, the sheets they are on are not folded, and the creator of the blot is encouraged to add to the blot, usually using pen and ink and thus make clear the scene they have envisioned – often a not or short rhyme is added, in addition to the creator’s signature and (often) the date.

The images range from the purely artistic (‘Poppie. N Gathorne Hardy’) to the overtly topical and political (‘Constance Power Exit Oom Paul 1900’). But most are whimsical (‘A Christmas Nightmare Marion E. Riall’; ‘Git your ‘air cut J G Clarke’; ‘ancestor of the Rialls in the time of Alexander the Great Eleanor F. Butler’; ‘This is meant to be a child swinging in case you don’t know J. Percy Knox Gore’; ‘My limbs are malformed as you see / In fact I have only got three / But my beautiful nose / I can scratch with my toes, / So there’s not much the matter with me! / Claud Riall’) and occasionally apparent sibling rivalry shows up (‘Oh! Bother Edith & her blots! Rosie Riall’

“As defined by a book on the subject, titled "Gobolinks, or Shadow Pictures," [by  Ruth McEnery Stuart and Albert Bigelow Paine ]  Gobolinks are a "veritable goblin of the ink-bottle." Although this book wasn't published until 1896, the idea of Gobolinks had been popular since the 1700s, when it was originally known as klecksography (a fancy word for inkblot art). These once sloppy drip-marks began to become art work in and of themselves and made famous by artists like Justinus Kerner (who was also a physician).

These goblins of the ink bottles became unique creatures - not purposefully made by the artist but willed into the world through the ink itself, but still abled to be interpreted. The Gobolinks book also made this art form into a game.

Here's how it works:

1) Players have to 'create' ink blots

2) The paper with the blot would then be folded in half, to create a symmetrical image.