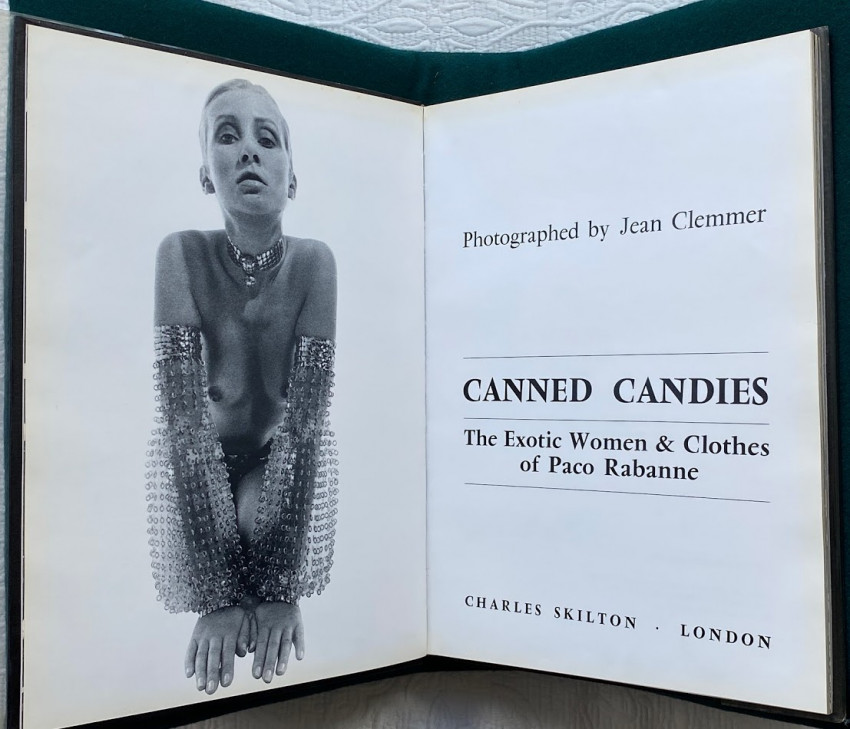 “Paco RABANNE” [Francisco Rabaneda Cuervo ] (b. 1934, designer). – Jean CLEMMER (1926-2001, photographer). Canned Candies: The Exotic Women and Clothes of Paco Rabanne. London: Charles Skelton, 1969.  Folio (13 ¾ x 10 1/4in; 350 x 260mm). Unpaginated. Photogravure illustrations from Clemmer’s photographs. Original black cloth lettered, clear-plastic dust-wrapper (lacking the printed paper dust-jacket). First edition in English: first published in France, titled ‘Nues’ and with French text.  Featuring the jewellery/costumes of Paco Rabanne, a radical force on the French fashion scene, photographed by iconoclast Jean Clemmer. ‘When Parisian photographer Jean Clemmer died in 2001, he left behind a legacy steeped in sexual intrigue and artistic innovation. Clemmer was Salvador Dali’s personal photographer and Jean Cocteau’s friend and muse. He consorted with the elite of the post-war French intellectual circuit and counted among his closest friends the most incendiary figures of the 1950-60s French avant-garde. He was a painter, a violinist, a surrealist, and, most notably, a photographer of rich and erotically charged nudes that were banned in parts of France even as the country was in the throws of a sexual revolution. … Originally from Neuchâtel, Switzerland, Clemmer arrived in Paris in the mid-40s with a “cardboard case full of pencils and brushes in one hand and his violin in the other,” [his niece, sculptor Hélène Clemmer Heidsieck]…  recalls. He was quickly adopted by the post-war intellectual set, including Dali, with whom he would come to work with for two decades. Of his photography, Clemmer told Dali, “Je veux montrer ce qui n’existe pas”: “I want to show what does not exist.” Clemmer was occupying the vaulted basement of the famed art deco restaurant Lucas Carton in Paris when editor Pierre Belfond approached him to produce a book of nudes. Clemmer chose Paco Rabanne, then considered a radical force in the French fashion scene, to collaborate on the project. It took them three months to produce the images in Nues (published in London as Canned Candies, the title of the exhibition). The publication caused an immediate sensation, both for its explicit nudity – the models wear little more than Rabanne’s elaborate aluminum and chainmail jewellery ­– but also because of Clemmer’s pioneering choice of black and Asian models. “It was very avant-garde at the time,” explains Hélène. “The models, their poses – accessories had never been presented this way.” That the raw beauty of Clemmer’s nudes still resonates in our sex-saturated times is testament to Clemmer’s artistic endurance....” (Julie Cirelli, AnOther, 2010).