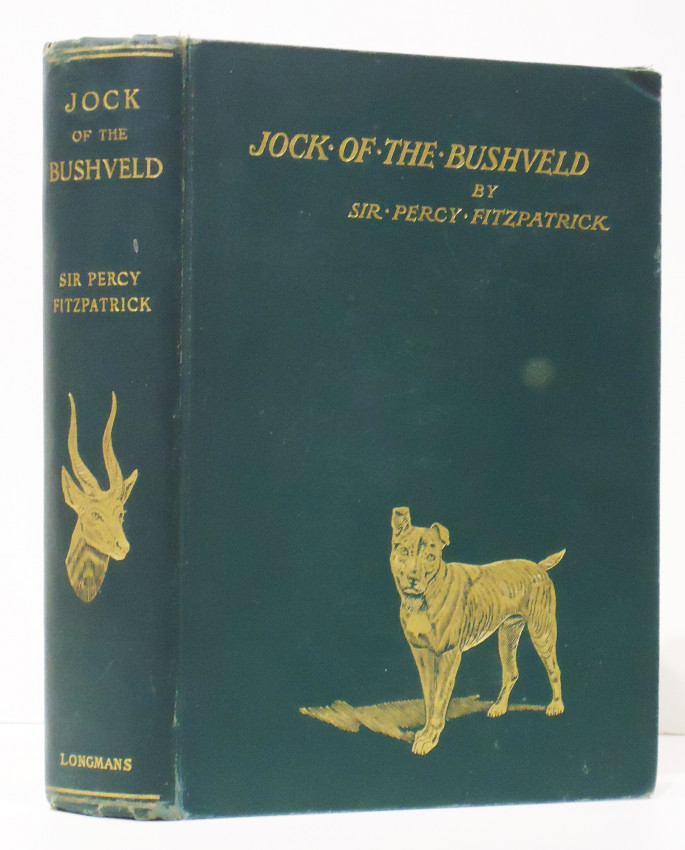 First American edition: 475 pages, colour frontispiece, plates and marginal illustrations, dark green cloth with gilt titling and gilt vignette of Jock on the upper cover, titled gilt with a gilt vignette of a buck’s head on the spine, which is starting to fray at the top and the bottom, the corners are slightly bumped, light foxing throughout and on the page edges, and the hinges are worn. The drawings of a dung beetle pushing his load with his front legs rather than his back legs on pages 65, 337 and 457 and Snowball the horse being dragged out of the river on page 316 - were changed in later impressions, a good copy.

No other first edition with an American imprint has been traced, making this a rare copy:

Extracted from the University of Reading Archival records for the Longmans Group: Fitzpatrick’s Jock of the Bushveld - a handwritten entry in the ledger dated Sept 11 1907: 521 copies cloth sold to NY; 520 copies folded sold to NY; 260 copies flat sold to NY. It is assumed that this edition is one of the compilation of the flat copies. At the top of the page for this entry is the following annotation in red ink: Work to be illustrated by Mr E. Caldwell and the payment for the drawings to be borne by the author.

The dedication on a front free end paper reads: It was the youngest of the High Authorities who gravely informed the Inquiring Stranger that “Jock belongs to the Likkle People!”

That being so, it is clearly the duty, no less less that the privilege, of the mere Narrator to dedicate the Story of Jock to those Keenest and Kindest critics, Best of Friends, and Most Delightful of Comrades The Likkle People

Rudyard Kipling, an intimate friend, used to take part in these story-telling evenings and he it was who persuaded FitzPatrick to put the stories together in book form. Having done this, FitzPatrick searched for a suitable artist to illustrate the book and eventually came across Edmund Caldwell in London and brought him to South Africa to visit the Bushveld and make the drawings on the spot.

The book, which appeared in 1907 for the first time, was an immediate and overwhelming success, being reprinted four times in that year.

The Life and Explorations of David Livingstone, LL.D.