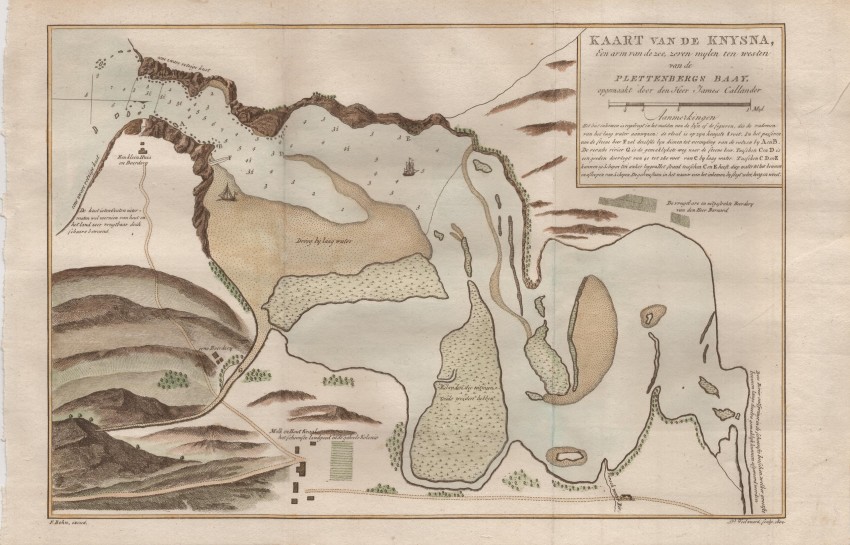 A tastefully coloured, Dutch example of this historically important chart of The Knysna lagoon at the end of the 18th century, when it was still an active harbour.

This is an historically important chart of The Knysna (then the name of only the river). "The first permanent settlement in the area occurred in 1770 when the loan farm Melkhoutkraal, which surrounded large parts of the lagoon, was allocated to a local farmer by the authorities in the Cape. When George Rex a timber merchant from Cape Town arrived in the area in 1804 he found that transporting timber by ox wagon was an almost impossible task. He then suggested to the authorities that it might be an idea to transport the timber by sea and commissioned his friend George Callander, to investigate the possibility of shipping timber from Outeniqualand by sea using the Knysna lagoon.

As his farm Melkhoutkraal bordered on the lagoon he provided the land for the jetties to be built. Up to this point in the history of the lagoon no large ships had attempted to enter the Knysna lagoon through the two sandstone heads that guarded its entrance so no one knew whether it would be possible to export timber by sea. The first ship to attempt entry was the 188-ton Royal Navy brig “Emu”, which did so on the 11th February 1817. The attempt was unsuccessful as she ran aground on a submerged rock and had to be beached on a sandbank just inside the mouth of the lagoon. A few months later in May of 1817, the “Podargus” was sent to rescue the crew and salvage the cargo of the Emu. It became the first ship to successfully enter the lagoon paving the way for the advancement of the timber industry in the area. As a result the timber industry flourished."

On his chart, Callander provides instructions on safe entry between 'the heads' and in the lagoon; he also includes a ship on the chart, and so it seems that ships must have been using the lagoon as a harbour at that time (i.e. before 1817).  There are also annotations on the chart relating, for example, to the beautiful forests, transport of wood in the river. The chart shows the exact location of George Rex's Melk Wood Kraal "the most beautiful estate in the whole colony". The chart displays the route of the wagon road past the estate, through today's town, towards the drift upstream of the current bridge.The hand-coloured chart is in fine condition - one tear outside the chart border has been expertly repaired.

This historically important chart is in fine condiyion; it frames beautifully and is a must for anyone who loves Knysna - a wonderful gift!

Reference: http://www.turtlesa.com/knysnalagoon.html  Not in Tooley or Norwich.