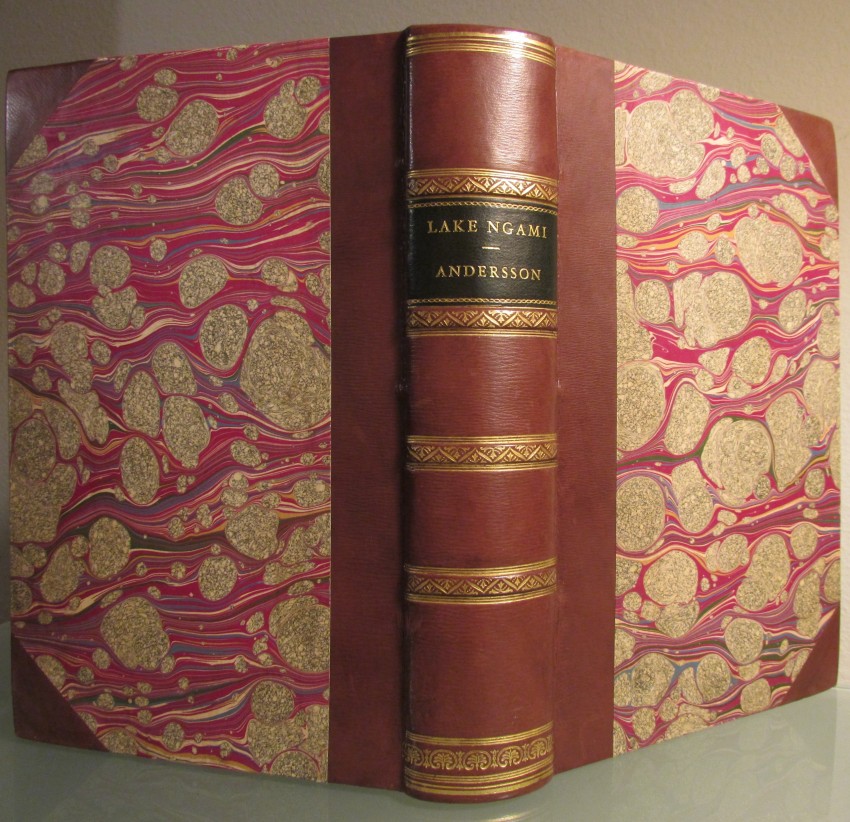 Or, Explorations and Discoveries, During Four Years' Wanderings in the Wilds of South Western Africa

First edition of Andersson's first book, a "famous early volume of African sport and travel a cornerstone book of African hunting in the mid-19th century" (Czech).

Mendelssohn (Sydney) South African Bibliography, volume 1, page 41: 'The narratives describe two expeditions, one in which the author was accompanied by Mr Francis Galton which extended to Nangoro's Werft in the Ovampo country, and the other when he travelled by himself to Lake Ngami. The courage and endurance of the explorers were remarkable, and their sufferings from the dearth of water were at times very terrible. Few, if any books give so full and complete an account of Namaqualand, Damaraland, and the Ovampo country and the description of the fauna of these countries is absolutely unequalled. Galton sailed for England in early 1852 and Andersson commenced his journey to Lake Ngami in the early part of 1853, reaching the lake about the middle of the same year. He gives descriptive accounts of the ostrich, giraffe, rhinoceros and other animals and a full description of the native races.

'The lively illustrations depict the pursuit of hippopotamus, eland, kudu, oryx, ostriches, lion, and other big game; this American edition, published the same year as the first British edition, with illustrations within the letterpress.

Andersson (1827-67), the illegitimate son of a Welshman living in Sweden and his Swedish servant, traveled to England in 1849 and joined Francis Galton's expedition to south-west Africa, "an area which was, at that time, largely unknown to Europeans" (ODNB). The expedition set out in 1850, landed at Walvis Bay, modern Namibia, and eventually reached Tounobis on the border with Botswana. Galton left in 1851, but "Andersson stayed on, determined to follow a career as a trader, traveller and naturalist", basing himself at Otjimbingwe, central Namibia, and becoming "deeply involved in the tribal politics of the region" (Howgego). In 1853 he set out to cross the desert to Lake Ngami (now no more than a seasonal marsh), taking a circuitous route via Windhoek and the Kalahari desert. After reaching the lake he continued 60 miles further north in search of the Okavango but was obliged to turn back, returning the following year via more settled districts. He published his account during a two-year return visit to England. He later managed the Walvis Bay Mining Company, before selling up in 1864 in order to organize an army of 3,000 Herero warriors against the Oorlam Afrikaners, during which conflict he received a leg wound which blighted his final years, and he died at Omutwe-Onjambu, Angola, three years later. Czech pp. 6-7; Howgego IV A19; Mendelssohn I p. 41; SABIB I p. 65; not in Abbey

Handsomely rebound. Original front panel bound in at the end of the volume. xviiii, 546 pages, large folding map, tinted lithographic frontispiece, plus 15 additional tinted lithographic plates, and numerous wood engravings in the text. Foxing is mostly confined to the lithographic plates and the pages near them. This copy also has the original 24-page publisher's catalog of advertisements, which are not often found in copies of this book. 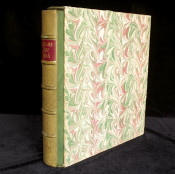 THE SCARBOROUGH TRAGEDY - ARTISTS' BOOK - ONE OF 75 COPIES