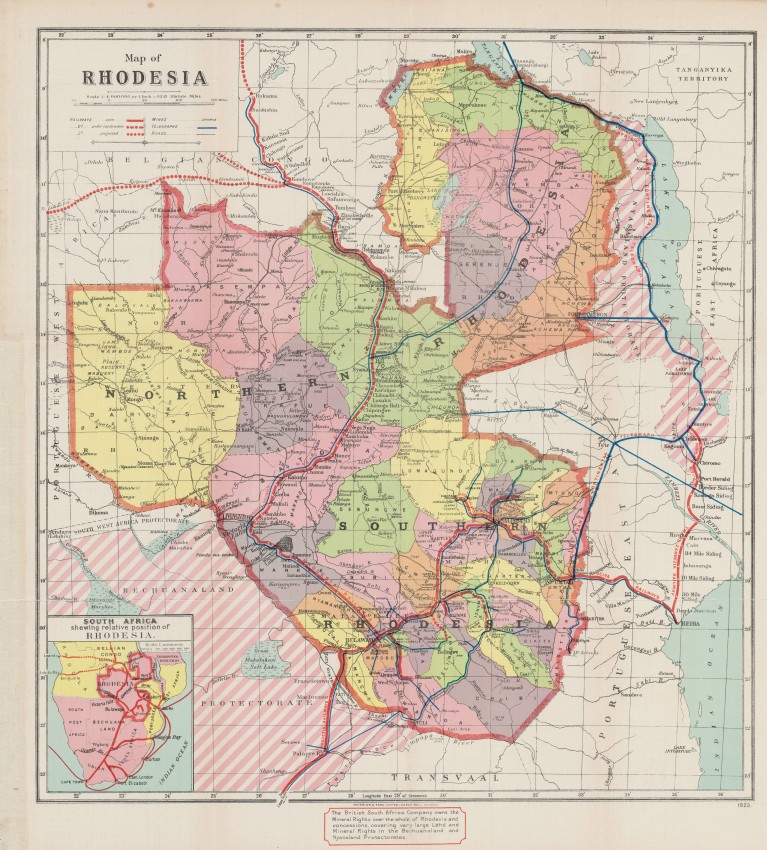 An attractive, historically important, map of Northern and Southern Rhodesia, now Zambia and Zimbabwe respectively. The map depicts very well the infrastructural development of the region at the end of WW1 and the year before the end of the BSAC (British South African Company), e.g. railways, telegraph lines, roads and some mines. Vivid reminders of the colonial past of these countries are the earlier names of the countries on the map and BSAC's claim of mineral rights to all of Rhodesia and some of the neighbouring territories are .

This and other maps of the regions were produced by fo the BSAC by Waterlow and Sons. Waterlows was betttter known for its lithography and printing of stamps, currency and commercial certificates. They first published this map in 1913 (possibly 1910), just before WW1, in 1919 at the end of WW1 and this 1923 edition. The title of map was prescient of the end of the BSAC in 1924: earlier editions of the map included "Under the Administration of The British South Africa Company".

The map was issued folded and the fold creases have been preserved.  A part of the left margin, where this map was bound (to a card cover), has been replaced with archival paper;  a few short marginal tears, outside the map border, have been repaired. The map is in near fine condition.

This is a fine and historically important map for a collector of maps of colonial south-eastern Africa and its infrastructural development as at the end of WW1 and end of the administration of the BSAC.

This map is not in Tooley or Norwich.