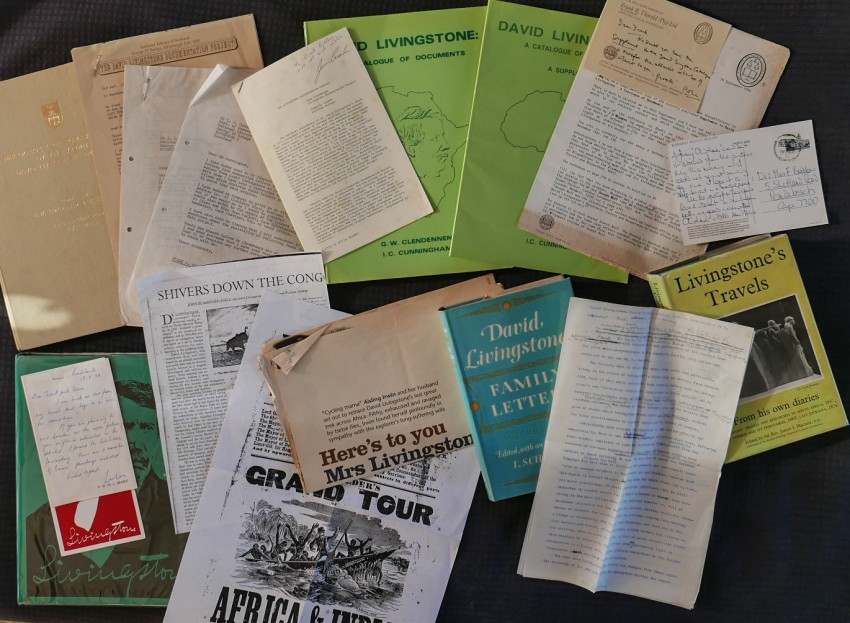 From the library of Edna and Frank Bradlow.

1) A BIBLIOGRAPHY OF PUBLISHED WORKS BY AND ABOUT DAVID LIVINGSTONE 1843-1975, compiled by B.W. Lloyd and J. Lashbrook and edited and completed by T.A. Simons. University of Cape Town Libraries, 1978. First Edition. xiii plus 115pp. Cloth hardcover with gilt titling to front board.

Loosely inserted into this book are six letters of correspondence exchanged between Frank Bradlow and I. C. Cunningham (Secretary of the Dept. of Manuscripts, National Library of Scotland - The David Livingstone Project), dated between the 19th of August 1975 and the 10th of February 1976. Pinned to one of Mr Cunningham's letters is a copy of publicity material used for a small exhibition on the Project.

Of particular interest and relevance to this listing is the research work conducted by the Bradlows on the numerous published variants of 'The Life and Explorations of David Livingstone' as well as the 1857 edition of 'Livingstone's Missionary travels and researches in South Africa', which gave rise to what are now known as the Bradlow Variants, as published in (Quarterly Bulletin of the South African Library, v.28, no.1, Sept. 1973, p.11-19) and (In Lloyd, B.W. Livingstone, 1873-1973. Cape Town, 1973. p.6-19). Bibliographical recognition of this research is referenced on page 61 of this book.

2) DAVID LIVINGSTONE: A CATALOGUE OF DOCUMENTS. Compiled by G.W. Clendennen and assisted by I.C. Cunningham. National Library of Scotland for the David Livingstone Project, 1979. First Edition. xxiv plus 348pp. Softcover.

Loosely inserted in this book is a letter dated the 10th of September 1986 from Robin Fryde (Director of Frank R. Thorold, Africana & Legal Booksellers) addressed to Mr Cunningham, expressing appreciation after receiving a complimentary copy of the recently published 'Supplement to David Livingstone - a Catalogue of Documents'. In the letter, Robin also goes on to highlight an error on page 27 concerning the incorrect published reference for the wood-engraving of the striped Eland from the North of Sesheke. Stapled to this letter is a compliment slip with a hand-written note from Robin to Frank Bradlow, drawing Frank's attention to the matter.

Loosely inserted are 3 tear-sheets from Good Weekend, June 19, 1999, a 6pp article titled 'Here's to you Mrs Livingstone', by Aisling Irwin, who with her husband set out on bicycles to retrace David Livingstone's last great trek across Africa. "Filthy, exhausted and ravaged by tsetse flies, Irwin found herself profoundly in sympathy with the explorer's long-suffering wife."

Included is a copy of an article that appeared in 'Country Life, March 14, 1996, titled 'Shivers down the Congo' by John Blashford-Snell who discovers Livingstone at the National Portrait Gallery.

There is also a copy of a poster titled 'Batchelder's Grand Tour of Africa & India!' A 'Panorama' embracing the Travels of Dr. Livingstone, and other celebrated Travellers. The whole covering 20,000 square feet of canvas, carrying the spectator from Portsmouth via Cape Town to the newly discovered regions of the far interior of South Africa, followed by Scenes in India... at the 'Old Ship' in 1859

And then there is a flyer advertising the 'David Livingstone and the Victorian Encounter with Africa'  exhibition of 22 March - 7 July 1996, with and attached note dated 'Rondebosch 17.5.96' and addressed to Frank and Edna from a friend who attended the exhibition. The conclusion reads 'There are a number of Baines' paintings included. Kindest regards Warham. The typed initials 'P.W. St. L. SEARLE' appear at the bottom of the note.

5) DAVID LIVINGSTONE FAMILY LETTERS 1841-48. Edited with an introduction by I. Schapera. Chatto & Windus, London. 1959. First Edition. 266pp. Cloth hardcover with DW. Some line illustrations in text and map. Volume 1 only.

Author's inscription 'Edna Bradlow from I. Schapera' to front free EP. The book has foxing to prelims and text-block edge, typical of so many of the books from the Bradlow's library, possibly due to rising damp under the shadow of Table Mountain in their Rondebosch home.

Included is a three page fountain pen and pencil edited typescript titled "David Livingstone. Family Letters. Edited, with an introduction by I. Schapera". Is it possible that the book, being volume 1 only, with accompanying typescript was sent to Edna to scrutinize and edit before volume 2 had gone to print?

6) LIVINGSTONE'S TRAVELS.  From his own diaries - Missionary travels and researches in South Africa, 1857; The Zambezi and its Tributaries, 1865; Last Journals, 1874. Edited by the Rev. James I. Macnair, D.D. (Chairman of the Scottish National Memorial to David Livingstone). J.M. Dent & Sons Ltd. London. 1954. First Edition. xvii plus 429pp. Cloth hardcover with DW. Maps printed to EPs. Further maps and b/w photo illustrations to contents.

Light foxing to prelims and text-block edges, typical of the vast majority of Bradlow Africana Collectanae.

Loosely inserted is a rather scarce postcard depicting the lion attack on Livingstone and his companion Mebalwe at Gopane on 16 February, 1844. The postcard bears the 'KURUMAN MOFFAT MISSION' rubber stamp to the reverse side. The affixed 12c postage stamp bears a 'Moffat Mission Kuruman 1985-12-12' postmark. The inscription to the Bradlows reads along the lines that 'the post card arrived from the printers only this morning and I could not resist sending you one'. This therefor is possibly the very first postcard of its kind to be posted on the day.

The Status of the Uitlander

HUNTING TRIPS OF A RANCHMAN. Sketches of Sport on the Northern Cattle Plains

1.) RHODESIA: Orders, Decorations and Medals and their Ribbons 2.) Badges and Insignia of the&hellip;