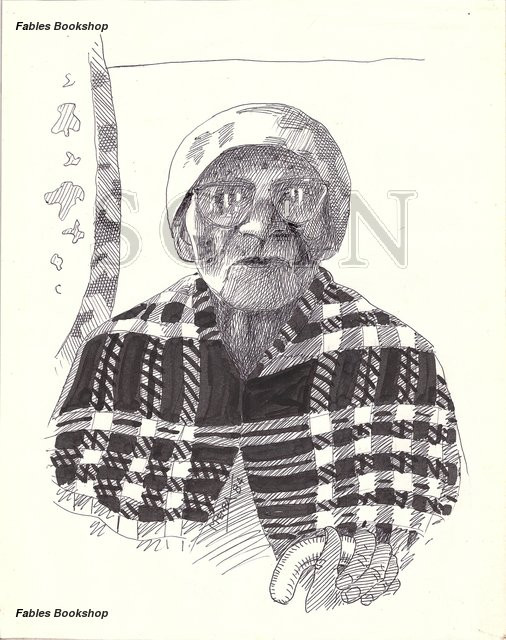 An unmarked example of Pemba's work.

Martha Bokako (née Plaatje) was the niece of writer and political leader Sol Plaatje. Born in 1890 she was the family repository of its history and that of her famous uncle. George Pemba visited her at her home whilst in Thaba Nchu. He did two distinctly different portraits of her - the first for her during his visit, and subsequently a second for the present owner who commissioned the work. She passed on in Thaba Nchu, a much loved member of the community, in 1983 aged 93.

George Pemba lived for most of his working life in the New Brighton area of Port Elizabeth. A leading South African artist of his time he was a contemporary of Gerard Sekoto, Gerard Bhengu, J.K. Mohl, & Ernest Mancoba. He received early tutelage from Austin Winter Moore at Rhodes University, and from Maurice van Essche in Cape Town while attending art classes at his studio.

A social realist his work captured daily life in township and rural areas of the country during the apartheid years. As well as using pen and ink he worked in water colours, later taking up oils. He did portraits of many famous people, including Nelson Mandela, writer S.E.K. Mqhayi, academic D.D.T. Jabavu, political leader H. Selby Msimang, composer Benjamin Tyamzashe. nurse Dora Nginza, and many more.

A highly successful exhibition of paintings from the 1940s onwards, was held at The Everard Read Gallery in 1991. In 1992 a second exhibition served to commemorate his 80th birthday, which was also celebrated with the artist at the King George VI Art Gallery in Port Elizabeth. In 2017, an exhibition of Pemba's work was hosted at the Nelson Mandela Metropolitan Art Museum. He was posthumously awarded the Order of Ikhamanga. (Wikipedia). To celebrate his 100th anniversary the South African Post Office issued a set of 10 stamps in 2012.