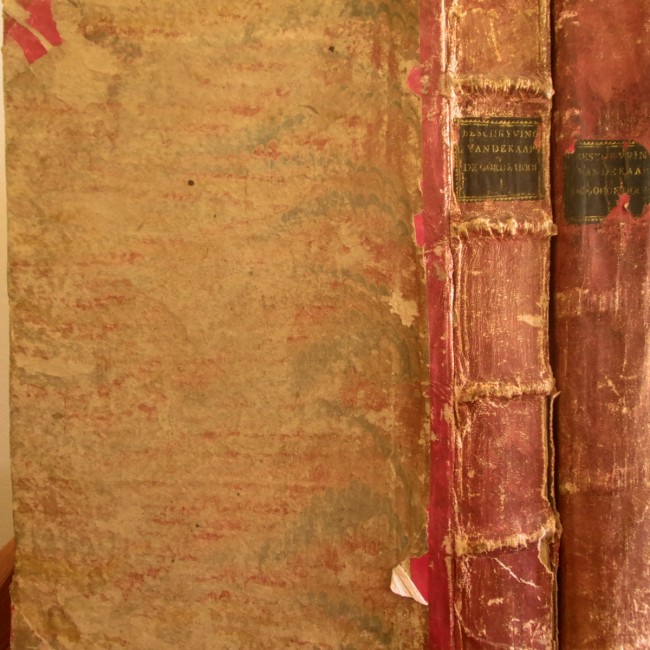 Worn half-binding, with frail red leather spines and rubbed paper boards. The spine title labels remain legible. The volumes remain tightly bound and the hinges are intact despite 2-3 minor binding cracks. Apart from a few light stains on the prelims, the contents are very good, bright, unfoxed, and unsunned and with no owner or other marks. Double-column text with generous margins and uncut pages.

Part 1. The title page is printed in red and black. xii + 529 pp, including 4 pp list of subscribers + 7 inserted folding maps and plans + 19 inserted engravings + 2 pp contents list for Part 2. The first large folding map has a few repaired tears, but the other maps and illustrations are bright, untorn, unmarked and undiscoloured.

Illustrated are animals, birds, fish and other sea animals and flowers. The rhinoceros is shown both as mythically imagined and as described by the author. A 22 pp section lists aloes and other plants, while another 14 pp section is an alphabetical listing of flowers and herbs.

Part 2. viii + 488 pp + 81 pp unpaginated index to both parts + 23 inserted engravings, mainly of Hottentots and their customs and activities.

Earlier versions of Kolbe’s work were published in Latin and German in Nuremburg in 1719. This definitive Dutch edition appeared a year after Kolbe’s death, with English and French translations being published later.

Allowing for the maps and plates, the two volumes together run to the equivalent of some 1170 double-column large folio pages.

The work was compiled during Kolbe’s eight-year stay at the Cape (1705-1713), but completed only after his return to Europe, when he held teaching and other positions. He also prepared his finished originals for the engravings during this period.

The title-page records that the Mayor of Amsterdam commissioned Kolbe to compile a description of South Africa and to carry out astronomical and survey research. Kolbe received an annual stipend from the city during his stay. As well as fulfilling his commission, Kolbe provided a valuable historical commentary on the government of the Cape six decades after the original Dutch settlement. On disputes between the Governors and the Burghers, Kolbe generally supported the claims and grievances of the latter, although he was actively cultivated by William Adriaan van der Stel (who has 37 index listings, compared with 22 for Simon van der Stel and 10 for Adam Tas).

This good and complete set of the first Dutch edition is attractive in its worn original state, although a serious collector might prefer to have the set custom-bound.