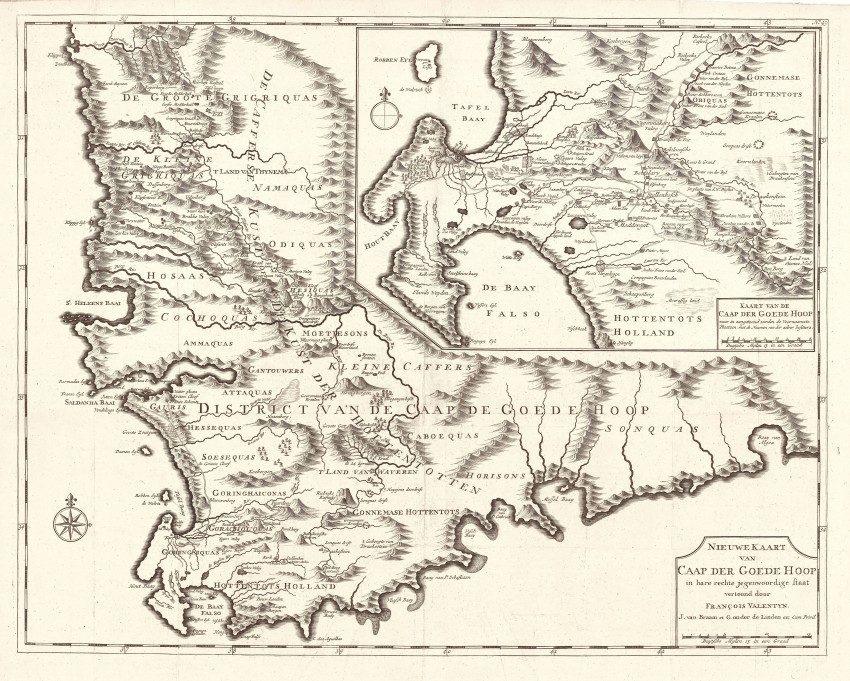 This 1726 map by François Valentijn is seldom available. Despite its inaccuracies, it is a landmark map that had a very significant influence on cartography of the Cape of Good Hope (through Peter Kolbe and Nicolas Bellin inter alia). It is especially notable for its recording of the expansion of the small Dutch colony eastwards to the Hottentot Holland Mountains and also for indicating a number of the outspans used by Simon van der Stel's party (1685) on its journey to the copper mines in northern Namaqualand (the map of Van der Stel's journey was not published).

In 1726, Valentijn published two maps of the Cape of Good Hope in the four-volume book Oud en Nieuw Oost-Indien (Dordrecht and Amsterdam, Johannes van Braam and Gerard onder de Linden, 1724 - 26). The Antique Map Price Record documents only four maps sold in the market since 1982.  The larger map, Nieuwe Kaart van Caap der Goede Hoop is a map of most of the Dutch settlement known at that time. The inset, Kaart van de Caap der Goede Hoop copied a VOC manuscript map from 1690: it shows the early eastward expansion of the colony, beyond the Liesbeeck River. It was the first widely distributed map to do so.

Despite anachronisms and avoidable cartographic errors, Valentijn's maps had a surprisingly wide and long influence on maps of the region. For example, Kolbe's posthumous map (1627), produced by the publisher of the Dutch edition of Kolbe's book, was a close copy of Valentijn's main map; in his Le Pays des Hottentots (Lot 91 in this auction), Bellin acknowledged Kolbe, not realising that Valentijn was the source of the Kolbe map.

The map is in fvery good condition (one small tear outside the plateline has been expertly repaired and the page has been reversibly backed on to Japanese tissue paper in order to stabilise the map). The map was folded in the book and the fold lines can still be discerned.

This seldom-available, important map is a must for any collector of maps of the Cape of Good Hope / Cape Colony.

Occidentalior Tractus Indiarum Orientalium ['The western extension of the East Indies' , i.e. the…