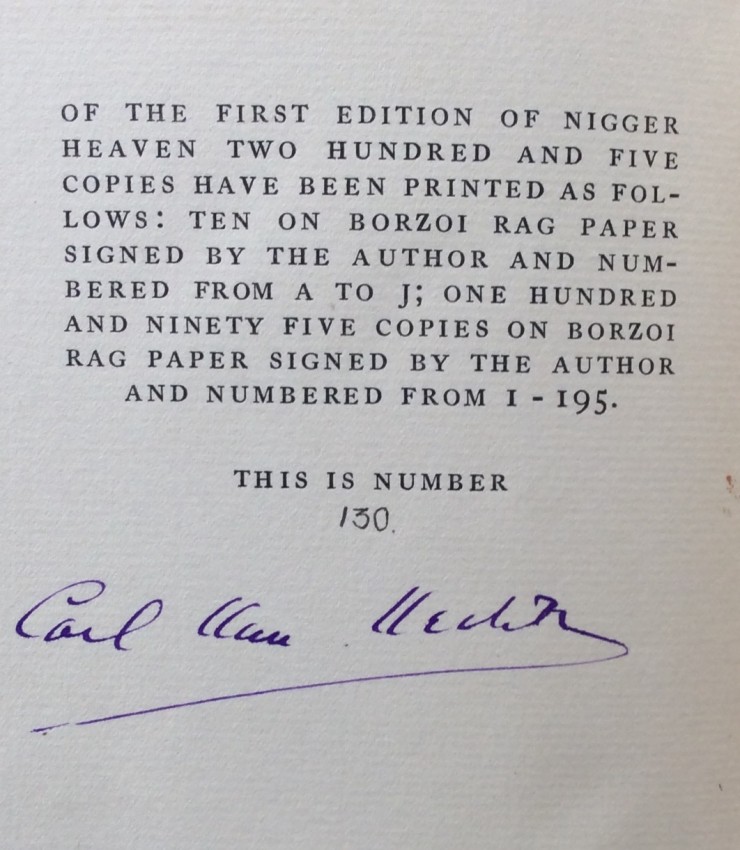 Limited edition signed by the author

First edition, Limited edition of 205 signed copies: lettered A to J, or numbered from 1 to 195. This example is signed by the author and numbered 130.

‘Carl Van Vechten (June 17, 1880 – December 21, 1964) was an American writer and artistic photographer who was a patron of the Harlem Renaissance and the literary executor of Gertrude Stein. He gained fame as a writer, and notoriety as well, for his novel Nigger Heaven.… One of his more controversial novels [it]… was received with both controversy and praise … He intended for this novel to depict how African Americans were living in Harlem and not about the suffering of Blacks in the South who were dealing with racism and lynchings. Although many encouraged Van Vechten to reconsider giving his novel such a controversial name, he could not resist having an incendiary title. Some worried that his title would take away from the content of the book. In one letter, his father wrote to him "Whatever you may be compelled to say in the book," he wrote, "your present title will not be understood & I feel certain you should change it."

Many Black readers were divided over how the novel depicted African Americans. Some saw the novel as depicting Black people as "alien and strange", and others valued the novel for its representation of African Americans as everyday people, with complexity and flaws just like the average White person was. Some of the novel's supporters included Nella Larsen, Langston Hughes and Gertrude Stein. who all defended the novel for bringing Harlem society and racial issues to the forefront of America.

His supporters also sent him letters to voice their opinions of the novel. Alain Locke sent Van Vechten a letter from Berlin citing his novel Nigger Heaven and the excitement surrounding its release as his primary reason for making an imminent return home. Gertrude Stein sent Van Vechten a letter from France writing that the novel was the best thing he had ever written. Stein also played an important role in the development of the novel.’ (Wikipedia)