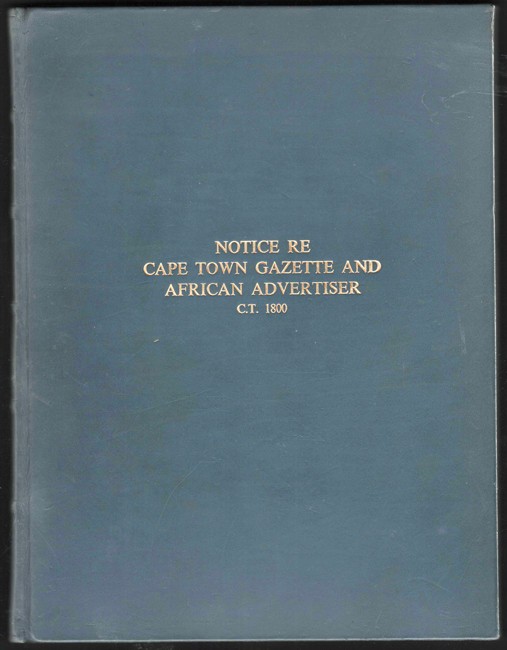 The Governor, His Excellency Sir George Yonge, Knight of the Bath, Etc., Etc. His Excellency has been pleased to grant Permission for the Printing and Publishing a Weekly Newspaper, in the English and Dutch Languages, under the Title of CAPE TOWN GAZETTE, AND AFRICAN ADVERTISER.

N.B. The First Number will be ready for delivery on Saturday, the 16th Instant.

Cape Town, 1st August, 1800
Two single sheets, 245 x 175 mm, one in English and the other in Dutch, printed on both sides. The two leaves bound into full light blue leather with gilt titling on the upper cover.

These Notices are amongst the earliest examples of printing at the Cape. Prior to the first British occupation of the Cape in 1795 printing at the Cape had been prevented by the Dutch East India Company which employed clerks to copy official documents. On 21st July 1800 Sir George Yonge granted Messrs. Walker & Robertson permission to set up a printing press to be known as the Government Printing Office, No.35 Plein Street, and this was followed by the notice to publish the Cape Town Gazette. Prior to these notices only fragments of printing are known. Laidler in his The Pre-Victorian Products of the Cape Press 1796 – 1837 (Johannesburg 1935) lists it as the sixth item. The first issue of the Cape Town Gazette – Kaapsche Stads Courant appeared on 16th August 1800.