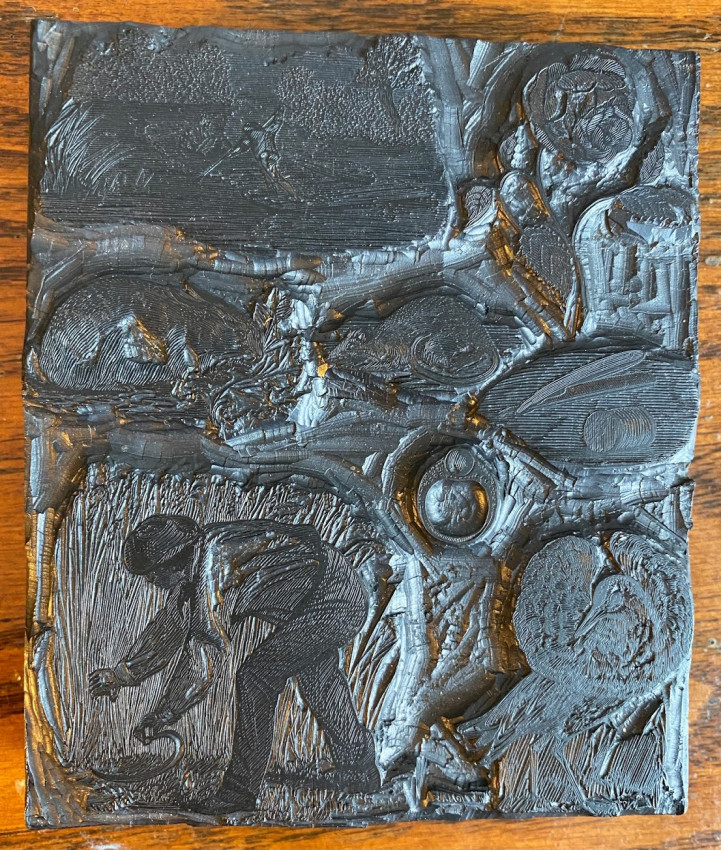 Condition: use has produced a fine dark patina to the upper surface. [see images].

Probably for use in a children's alphabet book? William Thomas was one of the most important and successful engravers of the second half of the 19th century.

‘It is not too much to say that there was a visible change in the selection of subjects by painters in England after the advent of The Graphic. Mr. Thomas opened its pages to every phase of the story of our life; he led the rising artist into drawing subjects that might never have otherwise arrested his attention; he only asked that they should be subjects of universal interest and of artistic value. I owe to Mr. Thomas everything in my early art career. Whether it was to do a twopenny lodging-house for women in St. Giles', a scene in Petticoat Lane, Sunday morning, the flogging of a criminal in Newgate Prison, an entertainment given to Italian organ grinders, it mattered little. It was a lesson in life, and a lesson in art. I am only one of many who received these lessons at the hands of Mr. W. L. Thomas.’ (part of obit. By Hubert von Herkomer).

Thomas was a friend of Charles Dickens and believed in social reform. At one time he worked for the Illustrated London News, and became convinced that pictures could have a powerful influence on public opinion, especially on political issues.

In December 1869 he founded a new weekly illustrated newspaper, called The Graphic with his brother Lewis Samuel Thomas. Important to the project was the recruitment of a number of brilliant artists to help illustrate it including Godefroy Durand who moved from Paris to London to work for the newspaper full time. In 1889, Thomas and his company H. R. Baines & Co. began publishing the first daily illustrated newspaper, called The Daily Graphic. He hoped that illustrated news would inspire people to campaign against various evils in Victorian society, including poverty and crime. His newspapers achieved a significant readership throughout the British Empire and in the United States.' (wikipedia)

N.b. the images include a digitally reversed image - this is a computer-generated positive image included to show what a print taken from the block might look like. An actual ‘pull’ (a print on paper) is also included.

The Adjutant to the 3rd Battalion The Leicsetershire Regiment

The Leicestershire Militia in South Africa

The City of Pretoria Official Guide