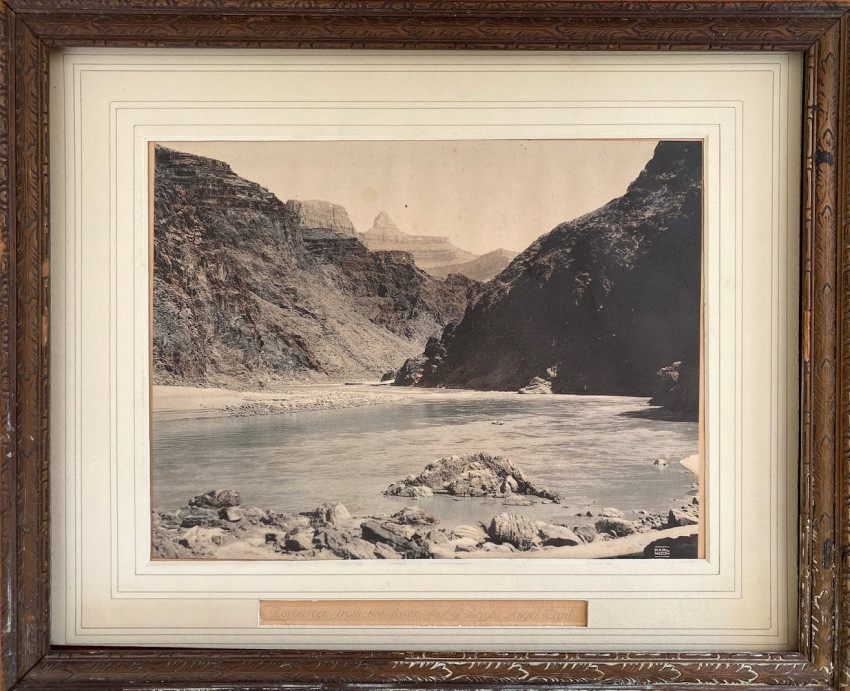 Original hand-tinted photo, titled on the mount “Zoroaster from the River. Foot of Bright Angel Trail”.

The Colorado River makes its way through the Grand Canyon.  A fine landscape image from a well-known photographer of the American West in general and Native Americans in particular.

“It was particularly the stories by James Fenimore Cooper that influenced the young Carl Moon's lifelong interest in American Indians. Although his words reveal much of the cultural insensitivity of the late 1800s, Moon's images suggest a more sympathetic attitude towards his subjects. Studying photography right out of high school, in 1903 he moved to the Southwest, where he began to paint and photograph Native Americans in New Mexico. His striking portraits soon began to attract national attention, and President Theodore Roosevelt even invited him to the White House to discuss his subjects. In 1907 Moon moved to the Grand Canyon in Arizona, where he photographed for the Fred Harvey company.

Seven years later Moon and his wife Grace moved to Pasadena, California. The two collaborated on numerous children's books: Grace wrote the text and Moon did the illustrations. In 1936 he published the four-volume set Indians of the Southwest, illustrated with his photographs, which sold for the then-astronomical sum of $3,500. By the end of his career Moon had photographed twenty-nine tribes and villages throughout the Southwest.” (Getty.edu).