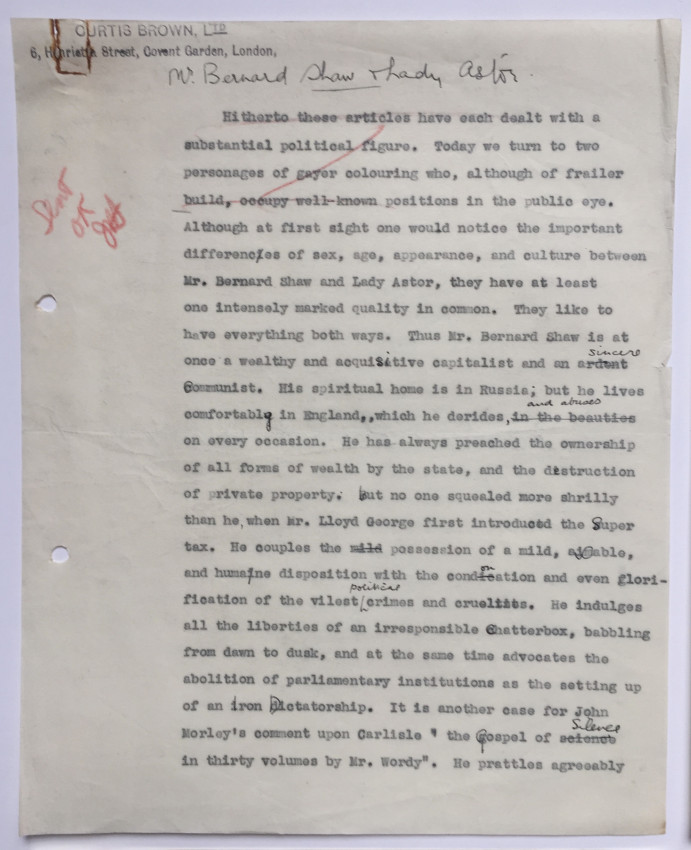 a carbon-copy of Churchill's Hearst Newspapers article, with some corrections by W.S.C.

6-page typed carbon-copy article, starting '“Although at first sight one would notice the important differences of sex, ago, appearance, and culture between Mr. Bernard Shaw and Lady Astor, they have at least one intensely marked quality in common. They like to have everything both ways", [N.p.: probably written in July/August 1931],  with manuscript corrections in ink, the first leaf with ink stamp of 'Curtis Brown Ltd' in the left side of the upper blank margin

Churchill attacks the official visit by George Bernard Shaw and the Astors to Stalin's USSR.

With an opening that was apparently discarded: “Hitherto these articles have each dealt with a substantial political figure. Today we turn to two personages of gayer colouring who, although of frailer build, occupy well known positions in the public eye". (These lines are crossed out).

The article's "official" start:  “Although at first sight one would notice the important differences of sex, ago, appearance, and culture between Mr. Bernard Shaw and Lady Astor, they have at least one intensely marked quality in common. They like to have everything both ways. Thus Mr. Bernard Shaw is at once a wealthy and acquisitive capitalist and an ardent Communist. His spiritual home is in Russia; but he lives comfortably in England which he derides, and abuses on every occasion. He has always preached the ownership of all forms of wealth by the state, and the destruction of private property but no one squealed more shrilly than he when Lloyd George first introduced the Super tax.”

WSC skewers his subjects, dismissing GBS as “the World’s most famous intellectual Clown and Pantaloon,” and Nancy Astor as “the charming Columbine of the capitalist pantomime.” WSC lambasts their Moscow reception comittee : “It must have been with some trepidation that the chiefs of the Union of Socialist Soviet Republics awaited the arrival in their grim domains of a merry harlequinade. The Russians have always been fond of circuses and traveling shows. Since they had imprisoned, shot or starved most of their best comedians, their visitors might fill for a space a noticeable void .... Commissar Litvinoff, unmindful of the food queues in the back-streets, prepared a sumptuous banquet; and Arch-Commissar Stalin, 'the man of steel', flung open the closely guarded sanctuaries of the Kremlin and, pushing aside his morning’s budget of death warrants and lettres de cachet, received his guests with smiles of unaffected comradeship.”

William Hillman was born in New York City in 1895. His career as a journalist started in 1915, and from 1926 onwards he worked as a foreign correspondent for Universal Service and Hearst Newspapers in Paris, Berlin and London. From 1934 to 1939 he was Chief of Staff, Foreign Correspondents, for Hearst Newspapers, also reporting directly to Mr. Hearst.

He subsequently did a lot of work for President Truman, and the Harry S. Truman Library & Museum in Independence, MO, have a large holding of his papers (but largely concerned with this latter part of his career from 1951 until his death in 1962 , with a few items going back as far as 1934). See https://www.trumanlibrary.gov/library/personal-papers/william-hillman-papers

Yale also have some of Hillman’s papers, part of the Than Vanneman Ranck papers (see https://archives.yale.edu/repositories/12/resources/3673 ). These are probably more relevant as they concern the workings of the Hearst organization.

Hillman stored his files and papers in a barn that was ‘local’ to his New Milford, Ct. property. In effect these ‘disappeared’ when he died and only ‘re-surfaced’ in the 1990s. The dispute over their ownership was not sorted out until 2005, and they were subsequently put up for auction in Litchfield, Ct. The present lot is from this ‘New Milford group’. 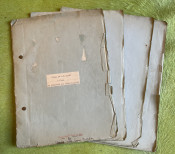 Delafield - Report on the Art of War in Europe