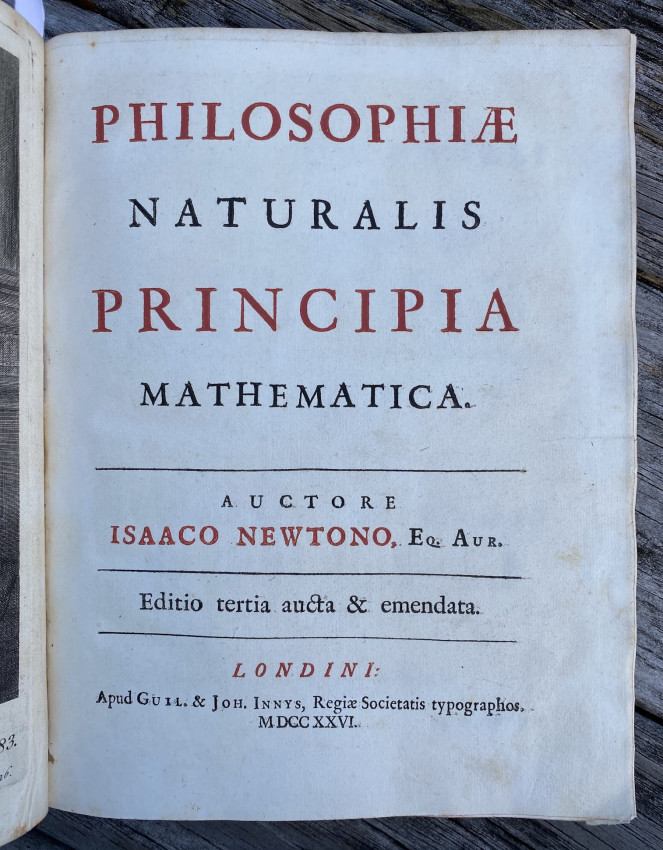 Contemporary paneled calf, spine in seven compartments with raised bands, red morocco lettering-piece in the second compartment, the others with repeat decoration in gilt, red speckled edges (bumped, spine slightly chipped at head and foot, lettering-piece a later replacement [by Traylen], joints split, but cords holding. Provenance: John Harcourt Chichester Evelyn (1876-1922, bookseller-provided information); Charles W. Traylen (receipt dated 1968 and subsequent letter dated 1973 noting that ‘this copy came from the library of J.H.C. Evelyn… It is possible that he was a descendant of the Diarist’, catalogue extract on rear free endpaper).

Third edition, of "the greatest work in the history of science" (PMM). A fine copy of the state on Demy or ‘ordinary-size paper ‘ (Babson) – one of 1000 copies printed. William Bowyer's paper stock ledger show that a total of 1250 copies were printed: 'Superfine' 50 copies; 'Royal' 200 and and 1000 on Demy (quoted in the 'Papers of the Bib. Soc. Of America').  "This edition was the last published during the author's lifetime and the basis of all subsequent editions. It was edited by Harry Pemberton, M.D., F.R.S., and contains a new preface by Newton and a large number of alterations, the most important being the scholium on fluxions, in which Leibnitz had been mentioned by name. This has been considered an acknowledgement of Leibnitz's independent discovery of the calculus. In omitting Leibnitz's name in this edition, Newton was criticised as taking advantage of an opponent whose death had prevented any reply . . ." (Babson, p.12).  Babson 13. Gray 9. Wallis 9.