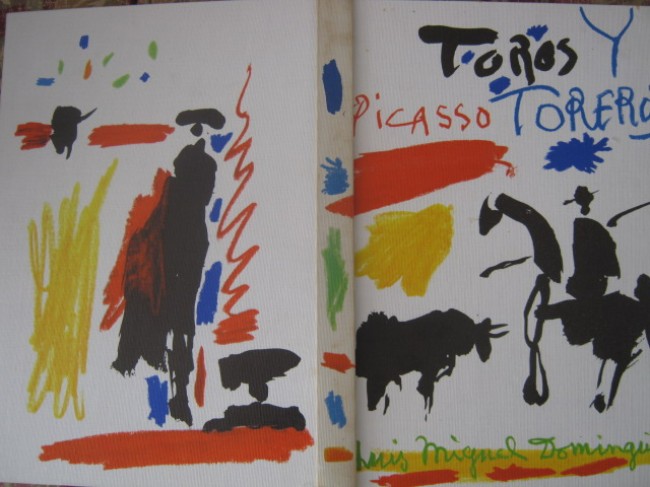 Apart from the introduction and the essay, the story of bullfighting is told through Picasso's eyes.

The slipcase has the artist's spine lettering and two-colour sketches front and back. The case is covered with unprinted green buckram top and bottom and two-colour printed cream cloth on the faces.

The book's covers are white buckram boards with Picasso's lettering and sketches in colour. The endpapers reproduce the designs and lettering of the notebook covers, while the back paste-down features an 1873 poster for the Malaga Plaza de Toros.

Some 90 heavy white cartridge leaves (i e 180 sides) are bound as mainly unpaginated printed pages or as additional endpapers.

The first 32 pp comprise the introduction (in Spanish with a French translation) and the essay (in French), both illustrated with Picassos pen-and-ink sketches. The rest of the book reproduces the artist's sketches and lettering, variously in black, black and a second colour and up to eight flat colours - sometimes on both sides of the sheet and sometimes on one side only.

(Although the book was published later in London and New York, the Paris edition, from which this copy comes, was the original.)

The high quality of the production, under the direction of Charles Field, was achieved through suppliers who contributed the reproduction of the illustrations, the typography, the printing (two printers, one for the photogravure sections and one for the lithography sections), and the binding.

Although this copy is 52 years old, the immediacy of the artist's work is such that one almost believes that one is looking at original Picasso sketches.