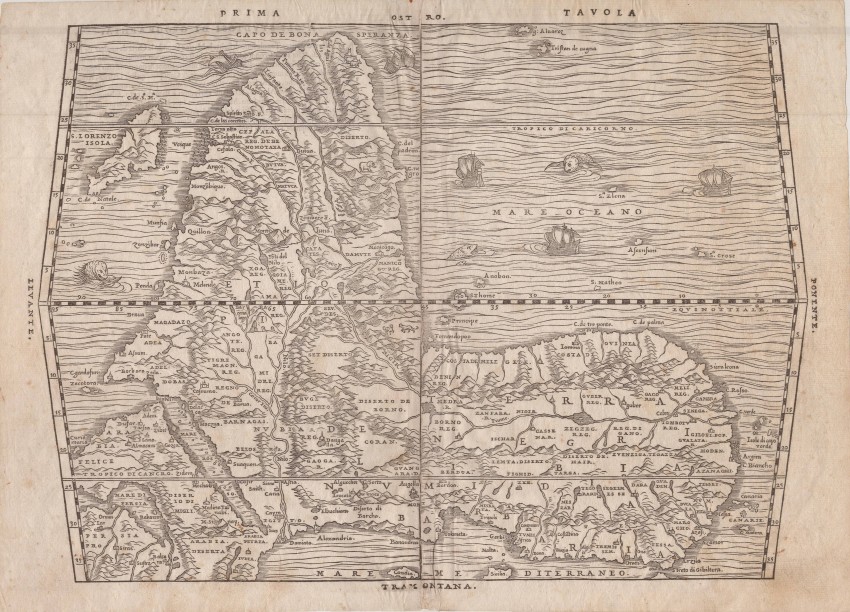 This is the >465 years old, woodcut edition of the famous first 'upside down' map of Africa. The map was printed from two woodblocks cut by Giacomo Gastaldi. It was published in only the 1554 edition of the Delle Navigationi et Viaggi by Giobattista Ramusio .  The original woodblocks were destroyed in 1557 during a fire and, therefore, this map is very rare.

The headline Prima Tavola [First Map] refers to the map being the first in volume I on Africa in Delle Navigationi et Viaggi. The book included the travel accounts of Marco Polo and Magellan. There are eleven lines of Italian text on the verso (including the header). The prime meridian is through the Canary Islands named after Insula Canaria, Island of the Dogs - large, fierce dogs were endemic to the island; it is also possible the islands were named after a species of seal that inhabited the area and which now are locally extinct.

This is a milestone map with a number of firsts.

Giovanni Battista Ramusio was a senior official of the Venetian Republic who was renowned for his collection of reports on voyages.  He obtained geographical information for his map from the Portuguese discoverer, Montalbondo. Ramusio's Delle Navigationi et Viaggi was much admired, translated and imitated, notably by Richard Hakluyt in England.  Ramusio also obtained geographical information from an Arab geographer, Hasan ibn Muhammed al-Wazzan al-Fasi. He was better known to Europeans as Leo Africanus; he published a similar upside-down map in 1556, in Historiale description de l’Afrique.

Giacomo Gastaldi served the Venetian Republic as a cartographer and worked with a number of publishers. After his woodblocks were destroyed, Gastaldi engraved a similar map on copper.  His later 1564 wall map of Africa is also a milestone in the history of cartography because it represents a significant departure from the Münster tradition.  His edition of Ptolemy's Geography was very highly regarded. His famous Geographia was the definitive book with maps of the "ancient world".

This is a wonderful, very rare, landmark 'upside-down' map of Africa; it is the only woodcut (i.e. first) edition of the map. The map is more 465 years old and in fine condition. It will enhance any collection of maps of Africa.

References: Betz. Mapping of Africa #7; Norwich's Maps of Africa #6; Not in Tooley