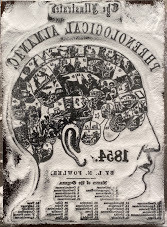 A comparsion with the NYHS copy of "The Illustrated Phrenological Almanac [for] 1854.” shows that the present plate was used on the upper cover.

The images include a digitally ‘reversed’ version. A version of the phrenological head was used on many/most of the ‘Almanacs’, but this one is somewhat unusual in that it includes a ‘key’ which identifies all the ‘Organs’ that are mapped out on the head. Phrenology may be summarized as “the detailed study of the shape and size of the cranium as a supposed indication of character and mental abilities.”

Phrenology “is a pseudoscience which involves the measurement of bumps on the skull to predict mental traits. It is based on the concept that the brain is the organ of the mind, and that certain brain areas have localized, specific functions or modules.  Although both of those ideas have a basis in reality, phrenology extrapolated beyond empirical knowledge in a way that departed from science. The central phrenological notion that measuring the contour of the skull can predict personality traits is discredited by empirical research.  Developed by German physician Franz Joseph Gall in 1796,  the discipline was influential in the 19th century, especially from about 1810 until 1840. “ (Wikipedia).

L.N. Fowler and his brother O.S. Fowler were two of the most high-profile advocates for Phrenology. During his long career, the former was reported to have examined the craniums of a check-list of the great and the good: Charles Dickens, William Cullen Bryant, Sir Henry Irving, Edgar Allan Poe, Baron Rothschild and Fowler’s Amherst classmate: H.W. Beecher.