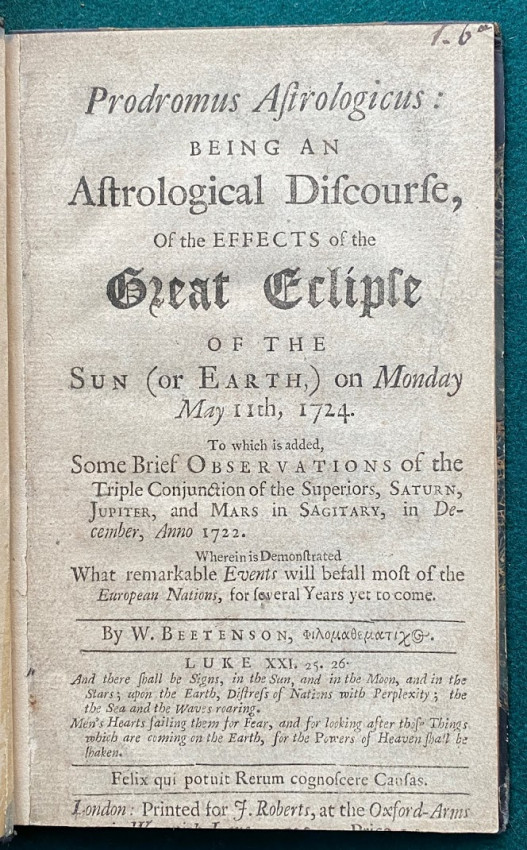 Prodromus Astrologicus: being an Astrological Discourse, of the effects of the great eclipse ... on Monday May 11th, 1724.

Prodromus Astrologicus: being an Astrological Discourse, of the effects of the great eclipse of the sun (or earth,) on Monday May 11th, 1724. To which is added, some brief observations of the triple conjunction of the Superiors, Saturn, Jupiter, and Mars in Sagitary, in December, anno 1722. Wherein is Demonstrated What remarkable Events will befall most of the European Nations, for several Years yet to come.

London: printed for J. Roberts, at the Oxford-Arms in Warwick-Lane, 1722. Small octavo (7 1/8 x 4 1/4in; 181 x 107mm). Pp. [8],66,[2] the final leaf being advertisements for the Author as a tutor of ‘Arts and Sciences Mathematical’, John Fowler, a mathematical instrument maker, and publisher, J. Wilcox. 2 woodcut illustrations, 2 letterpress astrological diagrams.  (Title shaved along the lower margin cutting into the imprint, but the ‘excised’ section saved an pasted onto the verso of the title, the second leaf of the preface shaved with slight loss to the catchword at the foot of the recto). Woodcut illustrations. 19th century half-calf over marbled paper-covered boards, titled in gilt on the flat spine.

A rare work issued at a time when it was quite reasonable for William Beetenson to advertise that he was able to teach the following: ‘Arithmetick, Geometry, Surveying, Gauging, Trigonometry, Navigation, Dialling, Gunnery, Fortification, Astronomy, and Astrology… also the use of the Globe, and other Mathematical Instruments’. The present work concentrates on astrology mixed with a little astronomy, all used to explain what was going to happen on 11th May 1724 during the forthcoming eclipse. His explanations would probably have carried more weight if he had not been two days off. The eclipse happened on the 22nd May.

The Free- Holder or Political Essays.