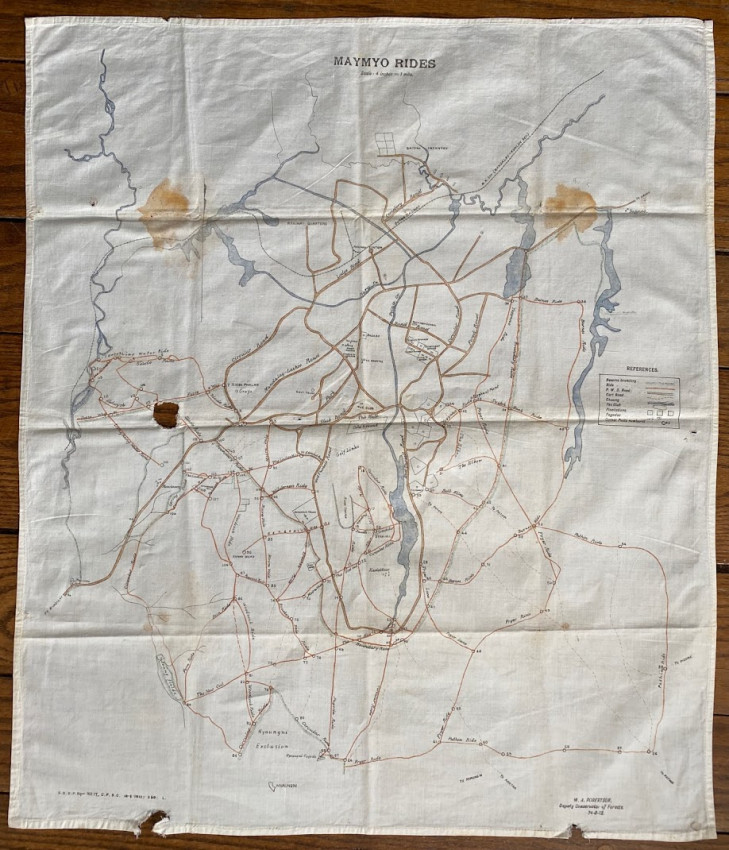 with three other maps, all on cloth, all of Myammar (Burma)

[MYANMAR (Burma)]. Three other earlier maps of similar interest [see images], all on cloth, two including Maymyo. All ‘photozincographed’, in two colors, printed in Calcutta at the Survey of India Offices. (4).

Very rare: conditions in Myanmar in the early 1900s would have ensured that maps such as these (probably intended for use ‘in the field’) did not last long. They were however a better bet than the regular versions printed on paper!

“The town began as a military outpost established near a small Shan village with two dozen households on the Lashio-Mandalay trail between Nawnghkio and Mandalay. In 1897, a permanent military post was established in the town and later, because of its climate, it became a hill station and the summer capital of British Burma. The establishment in Burma (civil, commercial and military) would move to Maymyo during the hot season to escape from the high heat and humidity of Rangoon. During British rule and through the 1970s, Maymyo had a large Anglo-Burmese population, but this steadily declined. … Today, Maymyo still has one of the larger populations of Anglo-Burmese in the country. The British named the location Maymyo, literally 'May's Town' in Burmese, after Colonel May, a veteran of the Indian Rebellion of 1857 and commander of the Bengal Regiment temporarily stationed in the town in 1887. The military government of Burma renamed the town Pyin U Lwin, the word-for-word Burmese transcription of the Shan " (Wikipedia).

MAP OF THE TRANSVAAL OR S.A. REPUBLIC AND SURROUNDING TERRITORIES