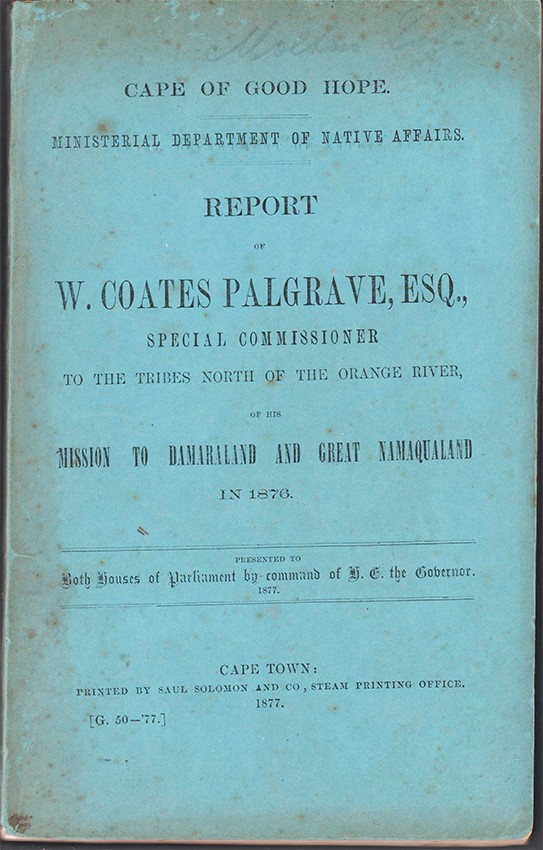 Special Commissioner to the tribes north of the Orange River of the Mission to Damaraland and Great Namaqualand.

Presented to both Houses of Parliament by Command of H.E. The Governor.

W. Coates Palgrave 1833 - 1897, Cape civil servant, came to the Cape Colony early in 1859 to seek relief from tuberculosis. In October 1869 he was appointed as a sub-inspector in the Northern Border Police Force, but resigned in 1871. The next year he was appointed in the administration of Griqualand West, first as magistrate at Du Toit's Pan, then magistrate at Kimberley, and then civil commissioner and resident magistrate at Barkly West.

While holding the latter post he was appointed (in 1874) as special commissioner of the Cape government to the Bechuana tribes, and later to the tribes north of the Orange River. In 1876 the Cape government sent him to the territory that is now Namibia to assess its resources and the attitudes of the Damara and Namaqua chiefs to incorporation into the Cape Colony. From Walvis Bay he travelled to Okahandja, Windhoek, Rehoboth, Berseba and Warmbad, and returned to Cape Town overland.

This mission resulted in the Report of W. Coates Palgrave, Esq., Special Commissioner to the tribes north of the Orange River, on his mission to Damaraland and Great Namaqualand in 1876 (Cape of Good Hope Parliamentary Reports G50-1877), and an article on "Damaraland and Great Namaqualand" in the Cape Monthly Magazine (1877, Series 2, Vol. 15, pp. 59-64). He was sent on a second mission to the territory later that same year to initiate the settling of white farmers, but the idea did not gain the support of local chiefs. His plan for British annexation of the coastal region of the territory was not carried out, though Walvis Bay and the surrounding region were annexed by the British in March 1878. Returning to Cape Town in January 1879 he was sent on a third mission to the territory in January 1880, but was recalled later that year when war broke out between the Damaras and Hereros.

In 1881 he was appointed civil commissioner and resident magistrate at George, a position he still held in 1896, but in November 1884 was again sent on a diplomatic mission to Namibia. Though he obtained a request from the Herero chief Maharero for his tribal land to be placed under the protection of the Cape Colony, nothing was achieved as the whole territory had already been occupied by Germany earlier that year. Palgrave was a capable and energetic man, a skillful diplomat who served the Cape Colony with great dedication. http://www.s2a3.org.za/bio/Biograph_final.php?serial=2109