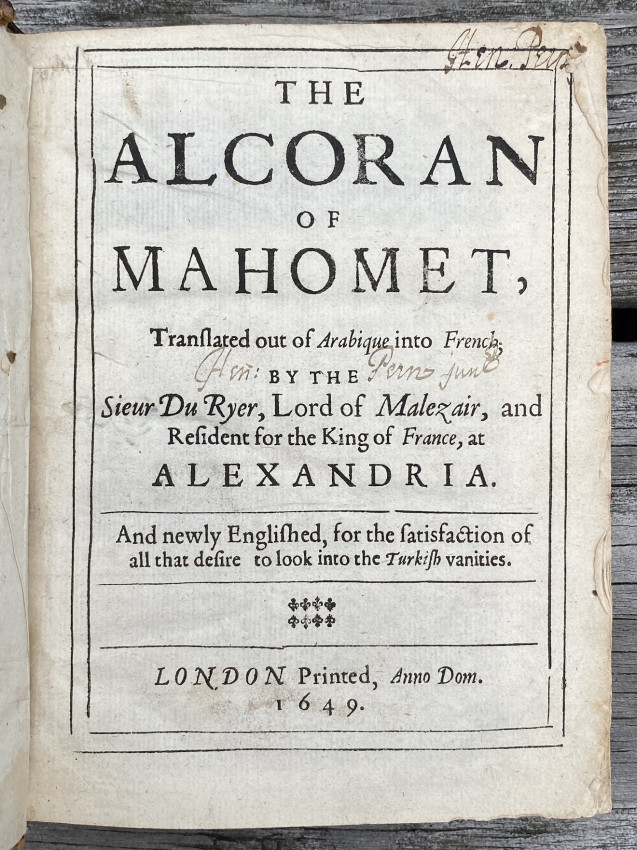 The Alcoran of Mahomet, Translated ... into French; by... Du Ryer ... newly Englished, [probably by Alexander Ross]

First edition, quarto issue, of the Koran in English

The Alcoran of Mahomet, Translated out of Arabique into French; by the Sieur [Andre] Du Ryer, Lord of Malezair, and Resident for the King of France, at Alexandria. And newly Englished, [probably by Alexander Ross] for the satisfaction of all that desire to Look into the Turkish vanities. London: 1649.
Quarto  (6 7/8 x 5 ¼in; 175 x 133mm).  Pp. [i-xxiv]; 1-407[-408 blank, 409-424, 425-26 the final blank]. Collation: A8 a4 B-Cc8 Dd-Ff4 [Ff4, blank]. Early ownership signatures to title. (Small chips to outer blank margin of the title, small wormhole to outer blank magi of about the first 20 leaves, each page with headline and page number within horizontal parallel rules, 18 pages shaved at the upper margin with loss to the uppermost of the two parallel rules – not affecting the headlines, page numbers, etc.) Contemporary speckled sheep, covers ruled in blind, spine divided into five compartments by semi-raised bands, red speckled edges, the foreedge with early manuscript accession shelf marks in ink ’31 / 11’  (joints split but holding, neat strengthening to front inner hinge, spine chipped and rubbed, corners bumped). Provenance: Henry Pern (early signatures, title signed twice ‘Hen: Pern jun.’).

First Edition, quarto  issue, of the Koran in English, translated from the French of Andre du Ryer. The work concludes with: "A needfull Caveat or Admonition for them who desire to know what use may be made of, or If there be danger in reading the Alcoran, by Alexander Ross” (1591-1654, to whom many attribute the English translation).

There was also an edition in octavo. The present quarto edition is considered by some to have been the first issue. This is an excellent unsophisticated copy including the final blank.

The 1649 Alexander Ross translation began amidst a state of civil war steeped in religious controversy.  The controversy between the Catholic translator and the new Puritan leadership would be cited and inserted into the preface of this new Qur’an.  The other aspect of the controversy remains today as this translation is consistently cited in a pejorative sense in Muslim translations of the Qur’an or Muslim books about the Qur’an.  For example, the book titled The Qur’ân and the Orientalists published in 2004 states that Alexander Ross “…aimed at exposing what he called the ‘Turkish Vanities.’  This phrase betrays, on the one hand his and his contemporary Europeans’ dislike of the Turks…” (MoharAli 326).

In the early 1600’s the English were keenly interested in the Qur’an and its contents because they were increasingly coming into contact with Muslims through trade or confronted on the open sea by marauding Muslims.  By 1640 the English interest resulted in the hiring of the first Professor of Arabic at the University of Cambridge (Matar 81).  Cambridge Professor Abraham Wheelock began, but never completed his translation of the Qur’an (Matar 81).  It is not known what became of his incomplete work.  During this period another translation was being attempted by a grocer and stationer who boasted that they were intent on creating a translation and then printing such a large number that their work would exceed all that had ever been accomplished (Matar 81).  The printing costs precluded them from completing their work.  The English would be forced to wait for the May 1649 printing of The Alcoran of Mahomet by Alexander Ross (Matar 81-82).

Alexander Ross began his translation under the English King Charles I and completed it under the reign of Oliver Cromwell the Lord Protectorate of England.  The King was executed in January of 1649 and the English government transformed from an Anglican monarchy to a Puritan Commonwealth.  Alexander Ross who was a Royalist and loyal to Charles I, was now in a precarious position under the new government lead by Oliver Cromwell (Matar 82-83).

The Qur’an of Alexander Ross ultimately served two purposes.  His first and original purpose was to expose the false teachings of Islam.  He believed that Islam was not only a physical threat, but a spiritual deception that finally merited attention.  A second and originally unplanned purpose was spawned by the arrest warrant from the council.  Ross would use the Qur’an by inserting some new prefatory material directly attacking the new Puritan Commonwealth government and their considerations of censorship due to their fear of printing Qur’ans on English soil.  Additionally, since Alexander Ross was a Royalist, he was staunchly and religiously opposed to the Puritan beliefs of Oliver Cromwell and considered them heretics just as he considered the Islamic Turks heretics (Matar 84).

The aim of this translation is clearly explained in the various letters and attachments inserted before and after the translation.  Alexander Ross retained and translated the prefatory material contained in the original 1647 French Qur’an, but added some of his own material.  Some of the additional material was inserted after the initial printing and disrupts the pagination.  The added sections include: The Translator to the Christian Reader; The Translation to the Reader and a needful caveat or admonition for them who desire to know what use may be of, or if there be danger in reading the Alcoran.  The first added section is the Translation to the Reader.  In this brief three page section Alexander Ross details the importance of this translation.  He begins by acknowledging the abundance of diverse heretical sects and believes it “…good to bring it to their Colours, that so viewing thine enemies in their full body…” (Ross A2).  Ross displays a credible grasp of fundamental Islamic beliefs as he discusses topics such as jihad and the reliability of hadith passages (Ross A2).  The last page of this section contains a hint eluding to the censorship problems he faced with the new Puritan government when he mentions that some “…were unwilling this should see the press” (Ross A3).  He concludes this section by stating the Qur’an is a poison that has infected many minds and the publication of this book, with all its false teachings, will prove the Christian faith is true and ultimately strengthen all Christians who dare read The Alcoran of Mahomet (Ross A3).  Publishing an overtly non-Christian book in a Christian land was a risky venture for Ross, but one he felt worth the effort to undertake in the hopes that the religion of Islam would be undermined by its own words.

Alexander Ross was absolutely convinced that any Christian thoroughly familiar with their scriptures would readily see the errors contained in the Qur’an (Ross EE).  Ross recorded this statement in additional material not originally considered for the Qur’an.  This is part of the material that was inserted later as a result of the warrant to appear before the council.  It is not stated, but is likely that one of the chief concerns of the Puritans were that innocent Christians would be converted to Islam by reading the Qur’an translated by Ross.  Ross firmly believed that his duty to the Christian world was to publish and expose the Qur’an.  His reasoning was that by translating the Qur’an and revealing all its falsehood that Christians would be encouraged in their faith as they readily observed its plethora of false doctrine.  Finally, the Qur’an itself would prove to the Christian world that it is a false religion and the publication of his English Qur’an would severely damage the cause of Islam and the Turks in particular.

The Qur’an of Alexander Ross was a popular book in England and beyond.  For example, in 1698 the famous colonial New England preacher Cotton Mather quoted from the Alexander Ross Qur’an (Matar 84).  The 1649 Qur’an remained popular enough to commission a 1688 printing (Matar 88).  The 1688 edition was printed using large and expensive elephant folio sized pages.  The Alexander Ross Qur’ans’ of 1649 and 1688 were the sole sources for most in the English speaking world for eighty five years, until the translation of George Sale. “ (http://englishtranslationsofthequran.com/1649-1905%20Translators/A_Ross.htm).