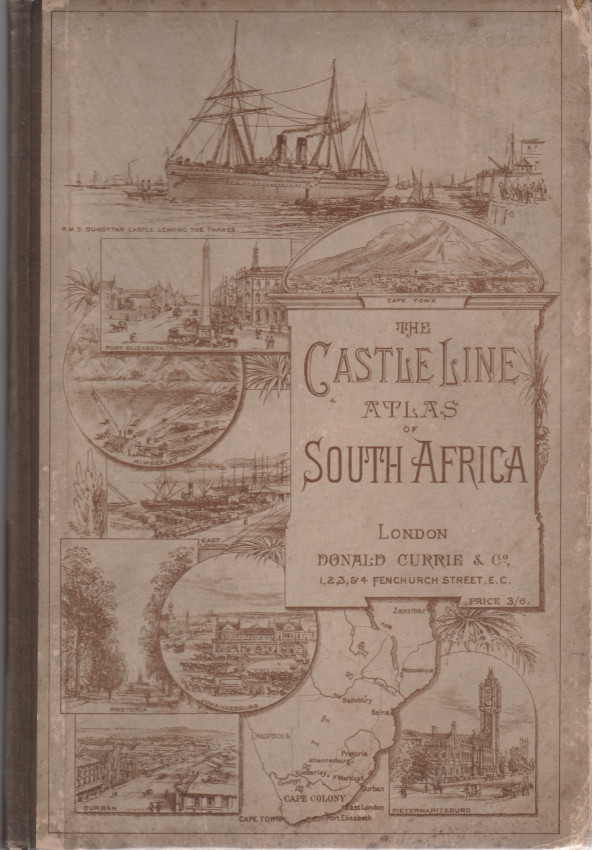 A seris of 16 plates, printed in colour, ontaining 30 maps and diiagrams. With an accountd of the geographical features, the climate, the mineral and other reouce and the histor of South Africa. And an index of over 6,000 names

Landmark Atlas for tourists and immigrants published shortly before the Boer War, which put halt on tourism and immigration.

A beautiful atlas with superb chromolithographs that promotes South Africa as a desirable and exciting destination.

Introductory text is a fascinating snapshot of the country and its history. The maps are beautiful chromolithographs in excellent condition. Donald Currie is of Currie Cup fame: he owned the Castle Line (later Union Castle) and also the Mt. Nelson Hotel. The atlas was a complimentary gift to first class passengers on the outward bound voyage from Southampton to Cape Town.

Maps include Africa south of the Zambesi, an ethnographic map of South Africa, detailed maps of Cape districts and Natal counties, maps of the main urban centres, the Boer republics, the Transvaal Gold Fields, the De Kaap and Moodie's Gold Fields, Matabeleland and Mashonaland, East Central Africa, including British Central Africa and Nyasaland.

The pages of text and the maps are in excellent condition.