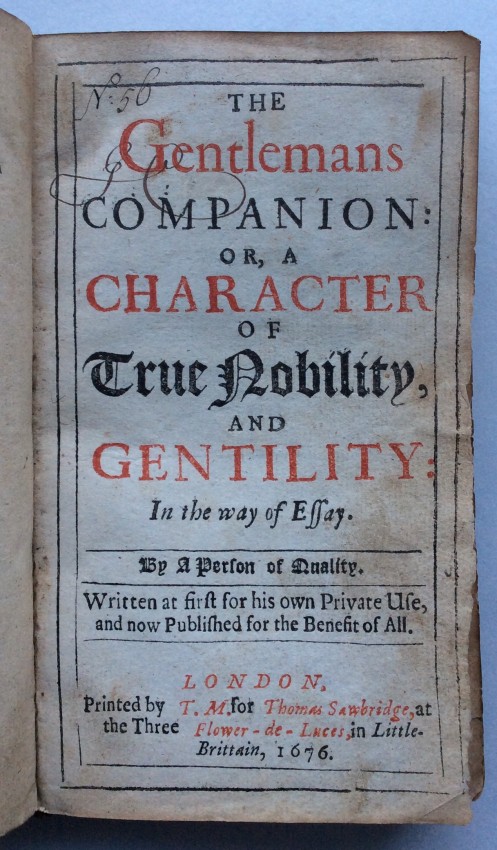 The Gentlemans Companion: or, a character of true nobility, and gentility: in the way of essay. By a Person of Quality.

The health benefits of golf, and a warning about marriage: " 'tis a Disease not to be Cured, but by Death".

The Gentlemans Companion: or, a character of true nobility, and gentility:  in the way of essay. By a Person of Quality. Written at first for his own private use, and now published for the benefit of all. London: printed T[homas]. M[ilbourn]. for Thomas Sawbridge, 1676. 12mo. Pp. [i-viii;] 1-264; [i-ii]. Title in red and black. Extra-illustrated with a loosely-inserted engraved armorial bookplate, dated 1712, from Thomas Wentworth, 1st Earl of Strafford (1672–1739). (Some light marginal toning.)

A fine copy of the rare second edition of a fascinating and entertaining work, here in a high status binding: includes what is probably the first time in print that a Doctor recommends the health benefits of golf, or 'gauff' as it is spelt here. Slightly earlier, the general idea of golf as healthful recreation appears in the Marquis of Argyle's Instructions to a Son (1661, quoted in The Chronicles of Golf, p. 108 ff.).

This second and final edition of Ramesay's work appears to be scarcer than the first and is properly rare. In a section on outdoor exercise, the author writes that "Exercises and Recreations which are used.. [in the outdoors], that may benefit a Gentleman, and most healthy, are Pilmall, [and] Gauff, these by striking the Ball exercise the whole Man, together with the walk, and may be used moderately without any excess or violence" (p.136). On the other hand, Ramesay did not approve of soccer ('foot-ball'), lumping it with 'hurling' and 'wrastling': all of which he describes as 'rude pastimes better becoming the Vulgar, and Labouring Man'. He relents slightly and allows that watching rather than taking part is acceptable.

The work, first published in 1672, is remarkably wide-ranging and includes an apparently heart-felt section on the importance of thinking long and hard before marrying (" 'tis a Disease not to be Cured, but by Death"): Ramesay, who was married to a 'termagent' according to the Rev. James Grainger, apparently expanded on this theme in his Conjugam Conjurgium or, some serious considerations on marriage (published in 1673, Macclesfield copy sold for 2400 GBP).

Ramesay most likely formed his opinion of golf at St. Andrews University in Scotland where he studied. Later in life he was appointed Physician in Ordinary to King Charles II in 1668.  In the "to the Judicous Reader" section of his Astrologia Ramesay (or, Ramsey) gives a long and detailed account of his early life: he was the son of David Ramsay (died 1658) the celebrated clockmaker to James I and Charles I, and, in addition to St.Andrews, was also educated at Montpelier and Cambridge. He was an elected license holder of the Royal College of Surgeons.