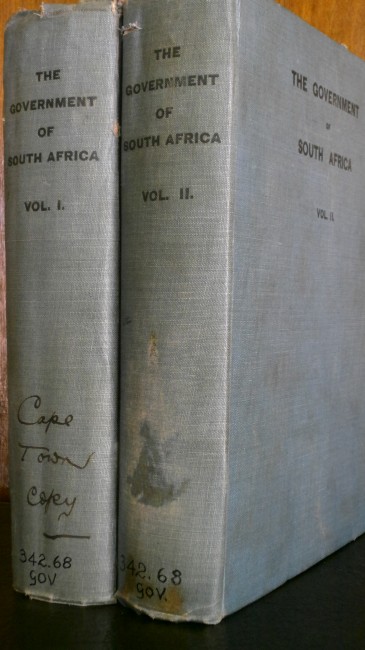 Our volumes were among the first 500 sets to be printed – hence the substantial addenda and errata booklet. Such a complete set - with all enclosures, including a 32-fold colour map of “British South Africa” is rare.

The volumes were compiled and published with public and private funding from the various colonies and territories of “British South Africa”. The main authors were not named but the contents are authoritative and comprehensive. They were intended to serve as working documents for various “Closer Union” societies, and these copies were from the Closer Union Society of Cape Town, which was one of the think-tanks during the period leading up to the National Convention, the South Africa Act of 1909 and Union itself a year later.

The first volume includes presentations on the functions of government, the machinery of political control and the constitutional method of establishing a South African union, while the second volume includes 37 statements on the population, voter and size of the 11 territories comprising “British South Africa” (as far north as Tanganyika), as well as many heads of income and expenditure and other information.

The eventual consensus was to incorporate only four of the 11 areas into a union.

The authors and compilers originally favoured a federation of states but their study later indicated a preference for a central union with provinces. A separate volume, by B K Long, analysed a federal arrangement, with examples taken from the constitutions of the United States, Canada, Australia, Germany and Switzerland.

The material in the volumes was originally circulated in instalments, with feedback from readers incorporated into the printed volumes.

Vol 1 – “Delegate’s Advance Copy” and “Cape Town Copy” – has J Bennett’s rubber stamp on several leaves. Vol 2 has a signature, which might be x x Cronje, in pencil on the front free endpaper. Both volumes have library stamps with “Dup” written next to these.

CONDITION NOTES. The original pale blue cloth-boards, black lettered to the upper panel and spine, are rubbed and stained, with Vol 1 showing more wear, and have Dewey numbers at the foot of the spines. The binding has loosened, but not markedly, with both Vol 2 endpapers cracked. The text pages are unmarked and undiscoloured. Tears to the folds of some of the maps have been repaired.

This is a collectable set of one of the most substantial documents prepared for study and debate in the lead-up to the formation of the Union of South Africa.