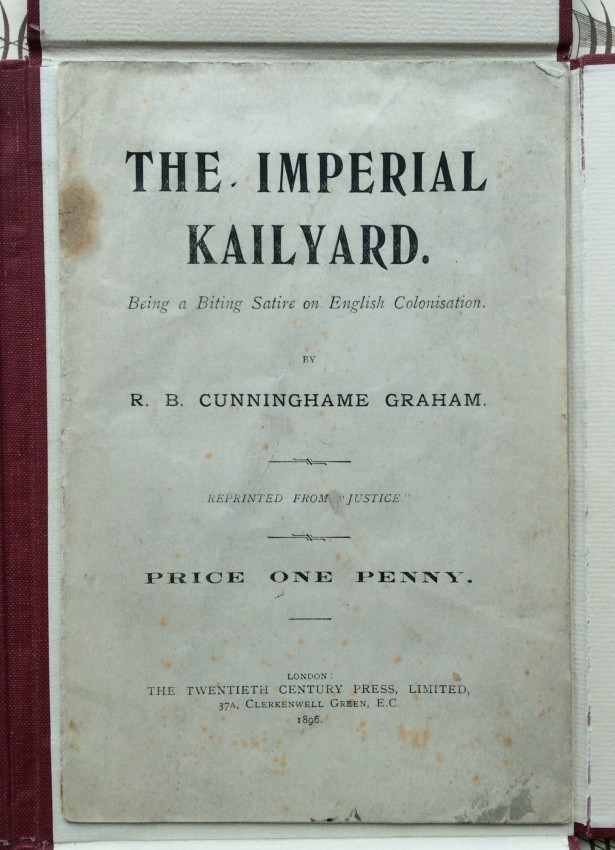 The Imperial Kailyard. Being a Biting Satire on English Colonisation.

[The second Matabele War and the Assassination of the M'limo] The Imperial Kailyard. Being a Biting Satire on English Colonisation ... Reprinted from "Justice".

Stapled, contained within a custom-made red cloth four-fold case, titled in gilt on the upper cover.

Condition: see illustrations, light surface soiling to first and last pages, some browning and spotting, staple a trifle rusty, but overall acceptable given the fragile nature of the work.

Ephemeral and very rare: the last recorded copy sold at auction belonged to John Quinn and was sold in 1923.

Cunninghame Graham, inspired by events during the second Matabele War and the Assassination of the M'limo, takes on the establishment view of the ‘benefits’ of colonialism, particularly in Africa. With savage tongue firmly in cheek. Graham apparently bemoans the fact that the Matabele refused to remain standing when their ranks were being decimated by 'quick firing guns' and, instead, proved how 'uncivilised' they were by falling flat among the bush and thus avoiding slaughter: 'Readers will see at once what cowardly brutes the Matabele are'. In a similar vein, Graham continues 'Again, we have the episode of the alleged "shooting" of the native god M’Limo. On this occasion two "heroes," an American [Frederick Russell Burnham] and a Briton [Bonar Armstrong], set out to capture this official in his own house ... "Being decoyed by the M'Limo into his cave, and seeing the treachery of the natives rendered capture imminent, and finding, in the circumstances, it was impossible to capture the prophet alive, Burnham, without further hesitation, shot him in the cave." A most heroic deed, heroically conceived, well carried out, and quite successful but in one respect, and that is that it was a lie, for recent telegrams declare the M'Limo is alive'

R. B. CUNNINGHAME GRAHAM "Born in 1852; educated at Harrow; M. P. for North Lanarkshire, 1886-92; J. P. An aristocrat by birth and associations, he spoke, wrote and worked for the disinherited, on one occasion sharing a police cell with John Burns for taking part in a Trafalgar Square meeting. A man of distinction in personality, views and gifts, and, at his best, a great writer." [Library of John Quinn parts 1-3, p.233]

The Mlimo (or M'limo, or Umlimo) the Matabele spiritual leader, is credited with fomenting much of the anger that led to this confrontation. He convinced the Matabele and the Shona that the settlers (almost 4,000 strong by then) were responsible for the drought, locust plagues and the cattle disease rinderpest ravaging the country at the time.

The Mlimo's call to battle was well-timed. Only a few months earlier, the British South Africa Company's Administrator General for Matabeleland, Leander Starr Jameson, had sent most of his troops and armaments to fight the Transvaal Republic in the ill-fated Jameson Raid. This left the country nearly defenceless. The British immediately sent troops to suppress the Matabele and the Shona, but it cost the lives of many on both sides. Months passed before the British forces were strong enough to break the sieges and defend the major settlements, and war raged on until October of the following year." (Wikipedia) 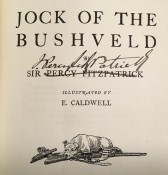 Jock of the Bushveld (SIGNED)

The Last Journals of David Livingstone, in Central Africa from 1865 to His Death.