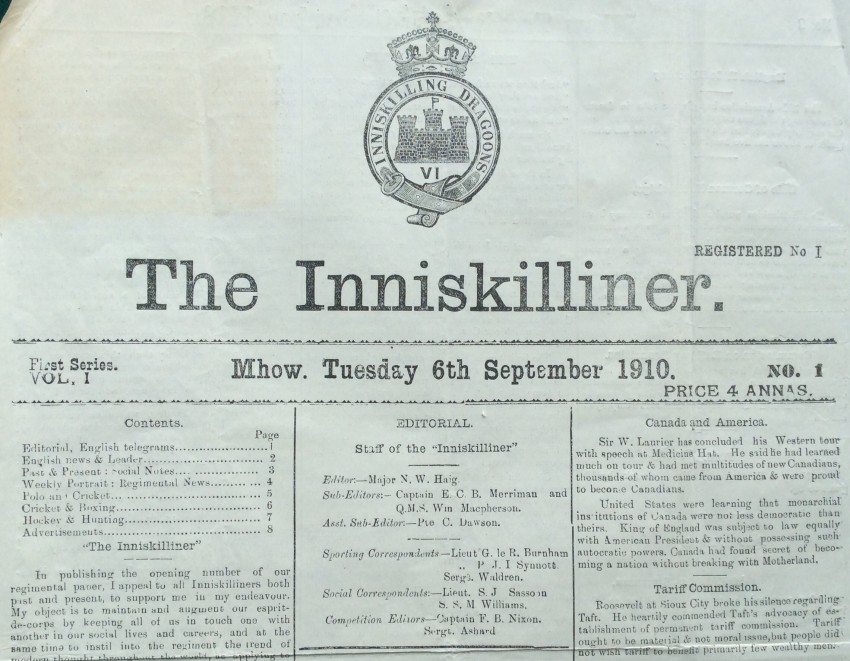 The Inniskilliner First Series. Vol.I No. 1.

Captain Oates departure for South Pole announced to his regiment

Condition: the first and last leaves split at centre-fold, some other old folds, some clean tears, most repaired, light damage with slight loss to final leaf.

Very rare first issue of this Regimental newspaper, with a note recording that Captain Oates had joined Scott's Antarctic Expedition: Oates 'of this regiment who went home on leave in Aril, has sailed  in the "Terra Nova" with Captain Scott's expedition for the South Pole. I hope before long to be able to give a full account'. Also includes a disparaging review of Erskine Childers views on cavalry tactics ; a quite extensive review of various Polo, Boxing, Hockey and Cricket matches; and a report of three pre-season meets of the Mhow Hounds: a pack that had been established by Oates.

Oates "was an English cavalry officer with the 6th (Inniskilling) Dragoons, and later an Antarctic explorer, who died during the Terra Nova Expedition. Oates, afflicted with gangrene and frostbite, walked from his tent into a blizzard. His death is seen as an act of self-sacrifice when, aware that his ill health was compromising his three companions' chances of survival, he chose certain death." (Wikipedia).

A Story of American Life