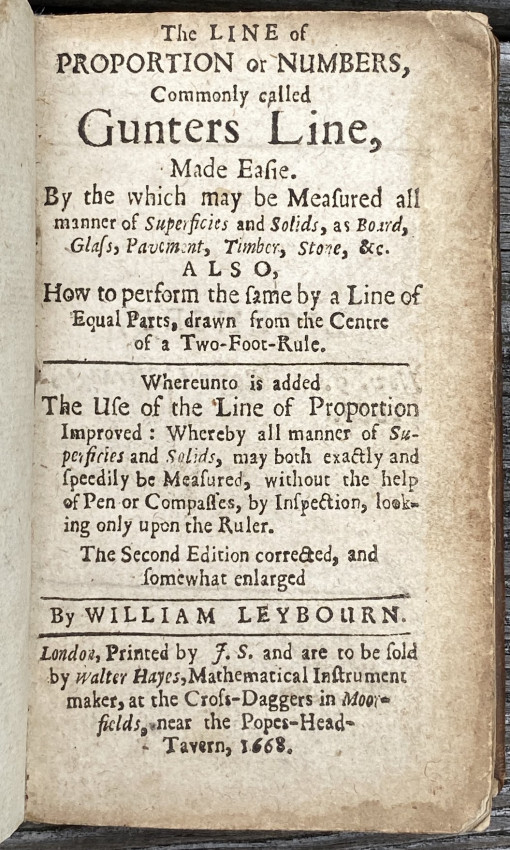 The Line of Proportion or Numbers, commonly called Gunters Line, made easie.

The Line of Proportion or Numbers, commonly called Gunters Line, made easie. By the which may be measured all manner of superficies and solids, as board, glass, pavement, timber, stone, &c. Also, how to perform the same by a line of equal parts, drawn from the centre of two-foot-rule. Whereunto is added the use of the line of proportion improved:   only upon the ruler. The second edition corrected, and somewhat enlarged by William Leybourn.

London: printed by J.S. and are to be sold by Walter Hayes, Mathematical Instrument maker, at the Cross-Daggers in Moorfields, near the Popes-Head-Tavern, 1668. 12mo (4 ¾ x 2 3/4in; 121 x 70mm). Pp.[i-vi]; 1-16; [i-ii]; 1-156. 1 folding engraved plate. (The plate torn with substantial loss [see images], pp.17/18, 19/20 and 73/74 with the lower outer corners torn away with no loss of text). Contemporary speckled sheep, covers outlined with simple pairs of rules in blind, similar tooling divides the spine into four compartments (later endpapers, extremities scuffed, dash of white paint to lower cover [see images]).

The first edition was published a year earlier, in 1667. The present second edition has a variant imprint: the issue recorded under ESTC R217638 reads: ‘printed by J.S. and are to be sold by George Sawbridge living on Clerken-well-Green’.  Hayes is listed as the publisher of a 1673 issue (ESTC R478860) with a cancel title page – this may also be the case with the present example? William Leybourn (1626—1716) was an English mathematican and land surveyor, author, printer and bookseller: "this Treatise may be beneficial and usefull (sic) as well to Gentlemen, and others, who at this time may have more than ordinary occasion to make use thereof, in the Rebuilding of the Renowned City of London, as to Artificers themselves, for whose sakes chiefly it was intended.".

Hayes is described as ‘arguably the most important instrument maker of his day’ (British Museum), and advertised his wares in other scientific books of the day, so it is not surprising that he should joint-publish the present work.

Walter Hayes (scientific instrument maker; goldsmith/metalworker; English; Male; c. 1618 - before 1692). Maker of mathematical instruments. Son of Peter Hayes, merchant of Chichester, Sussex. Apprenticed to John Allen in the Grocers’ Company in 1632, freed on 14th June 1642, remaining a member of its livery. By 1652 he had established a reputation for a high standard of work, selling a ‘full range of mathematical instruments’ in brass, silver and wood, as well as globes. Hayes had workshops first in Birchin Lane, Cornhill, and by 1653 at the latest ‘at the Cross-daggers [next door to the Pope's Head Tavern] in Moor-fields near Bethlehem-gate’, both London, and advertised his instruments in books on astronomy, mathematics, navigation and surveying. He became a free brother of the Clockmakers’ Company in 1668 and its Master in 1680-81.

Hayes was arguably the most important instrument maker of his day, respected for the quality of his work, perpetuated through the legacy of his apprentices (Hayes trained 14 apprentices between 1648 and 1684, the last of whom was Edmund Culpeper, a highly regarded telescope and instrument maker). He is thought to have died prior to 1696, when Jane Hayes, almost certainly his widow, is recorded as having sold mathematical Instruments to Christ’s Hospital.