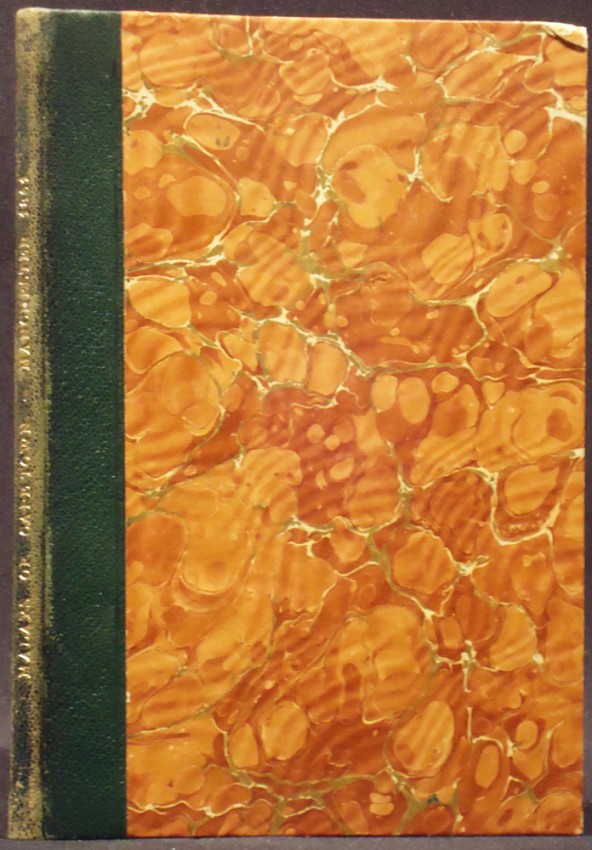 THE MALAYS OF CAPE TOWN

39 pages, wood engraving of a Malay figure opposite the contents page, bound in quarter green leather with gilt titling along the spine, marbled paper sides, a very good copy.

Mendelssohn (Sydney) South African Bibliography, volume 1, page 1003, 'This pamphlet, which has been "reprinted from the 'Transactions of the Manchester Statistical Society,' with additions," gives an account of the origin, religion, habits, occupations, and social position of the Malays at Cape Town.

It is stated that a large proportion of the Malays came to South Africa as free servants, "but on arrival were registered as slaves," but many of them "were the immediate offspring of female slaves and their Dutch masters," and of these the women are often characterised by considerable beauty. "In choice of colours and arrangement they often display considerable taste and appreciation of effect, their well chosen and somewhat showy attire adding a charm to their personal graces. Their figures are fine, and their features not devoid of comeliness." It is observed that the Malays excel as fishermen and drivers, but are active and energetic in many other callings.

They belong to the "Sonnite" (Sunni) sect of Mahommedanism, and are strict in conforming to their religious observances. They are represented as brave, clean, and faithful, and it is asserted that the only time they showed any opposition to the Government was during the anticonvict agitation, when they took the side of their white fellow-colonists.'

Among The Turks. With 27 Engravings.

A Guide to Uganda