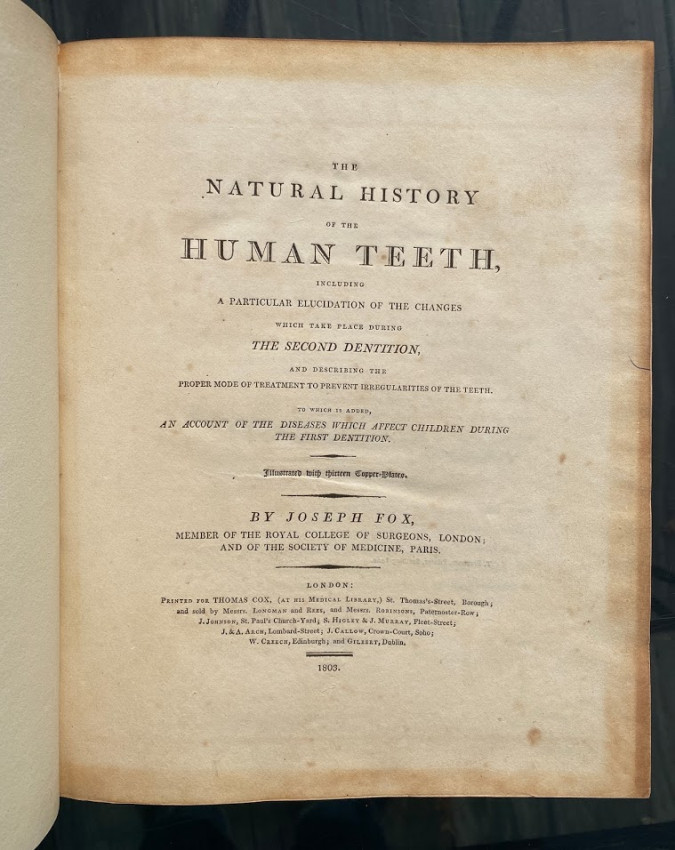 The Natural History of the Human Teeth.

The Natural History of the Human Teeth, including a particular elucidation of the changes which take place during the second dentition. And describing the proper mode of treatment to prevent irregularities of the teeth. To which is added, an account of the diseases which affect children during the first dentition. London: printed [by T. Plummer] for Thomas Cox… sold by Messrs. Longman and Rees, and Messrs. Robinsons, J. Johnson [etc.], 1803. Quarto (10 ¾ x 8 5/8 in; 273 x 219mm). Pp. [i-viii; 1-]100; i-xiv]. 13 engraved plates   (Small ink mark to outer blank margin of title, some toning to title [see images], occasional light spotting, without q2 final blank). 20th-century leather, covers bordered in blind, green morocco title label to spine lettered in gilt. (Light scuffing to leather). Provenance: Haskell F. Norman (bookplate, short pencilled notes at front and rear, sale: Christies NY, 15 June 1998, lot 448).

“Fox discusses the major causes of malocclusion in the permanent teeth and described his method of correcting these by means of a fixed metal band and silk ligatures. Fox's orthodontics marked a great improvement over the method of Fauchard and Bourdet, and his system of treatment found favour for nearly half a century." (Norman).

"In the spring of 1799 Fox began a course of lectures on the teeth to students at Guy's, and he continued as a lecturer there until his death. This was certainly the first series of lectures specifically on dentistry to be given in Britain, and probably in the world. On them he based his two books,  [the present work]  and The History and Treatment of the Diseases of the Teeth (1806), which were the first important dental works in English to have illustrations of operative dental procedures and of pathological dental conditions. Fox was also the first to give specific instructions for the correction of irregularities of the teeth. … These works were the first true textbooks on dentistry for students and practitioners..." (Oxford Dictionary of National Biography).

“Joseph Fox (7 November 1775 – 11 April 1816) was an English dental surgeon, known also as a philanthropist. He was a pioneer writer and lecturer on dentistry.

He was the son of Joseph Fox, a dentist, and his wife, Mary Rogers, daughter of John Rogers, a Baptist minister of Southwark, and was born in Crooked Lane, in the City of London. A medical student at Guy's Hospital by 1794, he became dresser to the surgeon Henry Cline.  …Fox built up a private dental practice in London. He belonged to the Particular Baptist church of John Rippon, in Carter Lane, London.

In 1807 Fox was taken by Sir John Jackson, 1st Baronet to hear Joseph Lancaster lecture, in Dover. He then met Lancaster and his supporter William Corston in London, and heard the extent of Lancaster's financial difficulties with his education society. With Corston and William Allen, Fox helped put the society, which became in time the British and Foreign School Society, on a sound basis. The initial committee consisted of: Allen, Corston, Fox, Jackson, with Joseph Foster and Thomas Sturge.

Lancaster himself chafed under the committee's tutelage, and became resentful. By 1812 he branched out with a boarding school at Tooting, without approval. Francis Place joined the committee that year, and a rupture became inevitable by 1814, with Lancaster resigning amid acrimony and alleged scandal.

In 1814, Fox and Allen bought into the New Lanark project. They were part of a consortium, including also Forster, put together by Robert Owen, to buy out the original New Lanark investors. The educational interests were relevant to Owen, who had been rebuffed by the Anglican Bell system, closed to dissenters. Fox supported Allen in his successful effort to make Owen allow religious education and the Bible in New Lanark's schools.” (wikipedia).