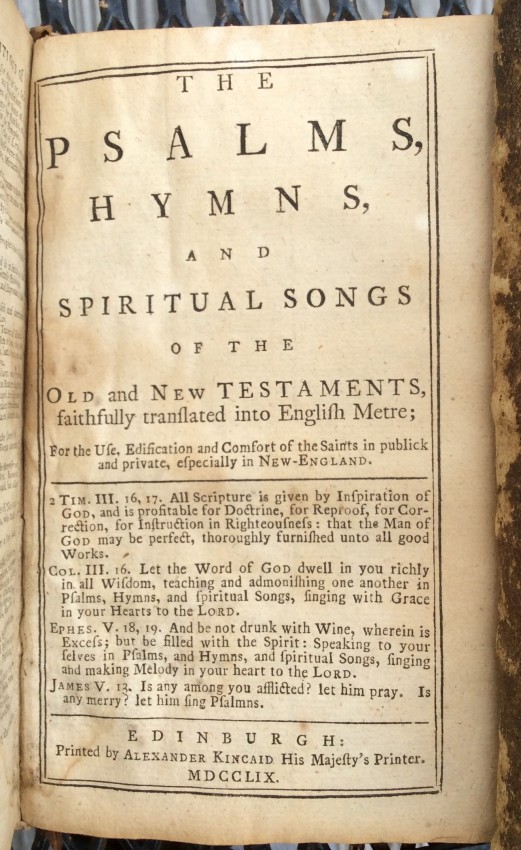 The Psalms, Hymns, and Spiritual Songs of the Old and New Testament... For Use ... especially in New-England.

BAY PSALM BOOK. - The Psalms, Hymns, and Spiritual Songs of the Old and New Testament.. . For Use, Edification and Comfort of the Saints . . . especially in New-England.

BIBLE, in English. - The Holy Bible, Containing the Old and New Testaments.

Two works in one volume, condition of contents: toning, old dampstaining to first c.50 pages of the Old Testament.

Contemporary ?American speckled sheep, covers with simple roll-tool border in blind, spine with raised bands, within an old leather (?deerskin) 'travelling' chemise with yapp edges to upper and lower edges and a flap at the fore-edge designed to fasten to the upper cover (the fastening defective) - the roll is similar to one used by Andrew Barclay of Boston (see images).

A very rare late edition of the famous Bay Psalm book (possibly the last edition to be published without the Rev. Prince's revisions of 1757/8), bound with an apparently unrecorded issue of the Bible. In addition, there are two further possibilities that would add considerably to the book's interest:

1. the binding may be by Scottish/American binder Andrew Barclay: the blind roll on the cover is an apparent match for roll 'T5' as pictured in Hannah French's 'Bookbinding in Early America' (Worcester, 1986) p.39, and see images.

2. the inscription at the front may refer to a Thomas Hewston who served as a 'Ranger on the Frontier' in Pennsylvania sometime between 1778 and 1783, raising the possibility that the present work, in its 'travelling binding' accompanied him during his service.

Although there were apparently 22 editions of the Bay Psalm book published in Scotland, they are rare on the market: the records show just two examples, in 1938 Goodspeed's offered a 1741 18th edition with the upper cover of the binding missing, and in 1896 Littlefield offered a 1737 16th edition. None are listed as having been offered at auction.

"The Bay Psalm Book was first published at Cambridge, Massachusetts, in 1640, under the supervision of Rev. Richard Mather, of Dorchester, Rev. Thomas Weld and Rev. John Eliot, of Roxbury. In 1647, a second edition was printed with the same title and preface as the first. To this a few "spiritual songs" were added, and many typographical errors of the first edition were corrected. In 1650 the third edition was printed, revised by Rev. Henry Dunster, President of Harvard College, and Mr. Richard Lyon, with the addition of other scriptural songs. From this time it passed through edition after edition, without any other alteration, till it was revised in 1758 by the Rev. Thomas Prince. It was reprinted in England and Scotland, and was preferred there by some eminent congregations as late as 1770. In Scotland it passed through twenty-two editions, the twenty-second being printed in 1759. These had the preface of the American edition prefixed, and were bound up with an edition of the Bible." (George E. Littlefield Catalogue 38 issued in 1896, re. item 48)