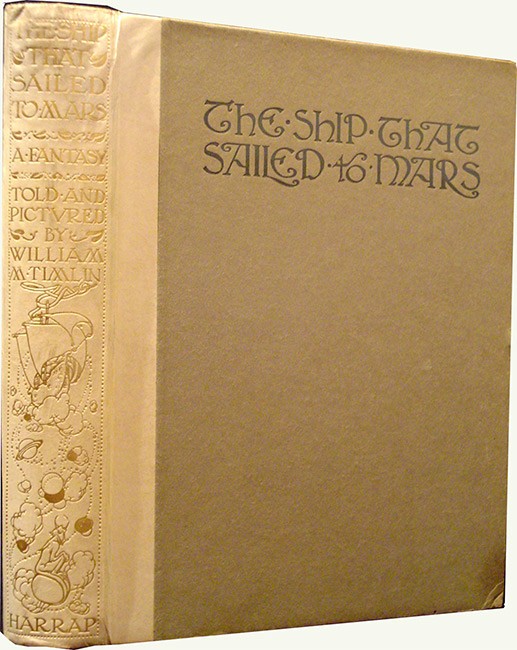 THE SHIP THAT SAILED TO MARS

A FANTASY, TOLD AND PICTURED BY WILLIAM M. TIMLIN.

Illustrated title page and 48 colour plates by the author and 48 decorated sheets of calligraphic text all mounted on stiff grey card, original white parchment back and grey paper covered boards lettered on upper cover in black, the spine is richly decorated and titled in gilt and is unusually clean and bright.

The bottom corner of the upper board is bumped and the paper worn through, inscriptions of previous owners on both the front endpapers.

The binding is a little loose as often is the case with the book. Overall a good copy with minor imperfections in the scarce dust jacket which is torn and with some loss and is now preserved in a Brodart protector.

2000 copies of this extraordinary book were published. Only 738 copies were sold (350 to the United States). In 1928 1208 copies were remaindered. Timlin paid 425 pounds towards the publication and received 4/6d. per copy plus a royalty of 10% of the net amount received. A 10% royalty only was paid on the copies sold in the United States. 500 pounds was paid for the film rights which was shared equally between the author and publisher. The film was to be called \"Get off the Earth\" but was never made.

William Mitcheson Timlin (1892 - 1943) was born in Northumberland, the son of a colliery foreman and studied art in Newcastle before his family emigrated to South Africa, where he completed his studies in art and architecture. He then practised as an architect, designing a number of major public buildings in Kimberley; at the same time he worked as an artist, producing paintings, etchings and pastels of conventional subjects, in addition to the watercolour fantasies for which he is best known. He also wrote stories and music, and did periodical illustrations. In 1923 he published The Ship that Sailed to Mars, which he wrote, and illustrated himself. He began work on another fantasy book entitled The Building of the Fairy City but it was never completed.

A BREATH FROM THE VELDT:

TREKKING ON (Signed by the author and General Smuts) 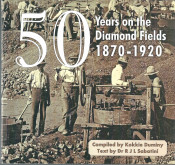