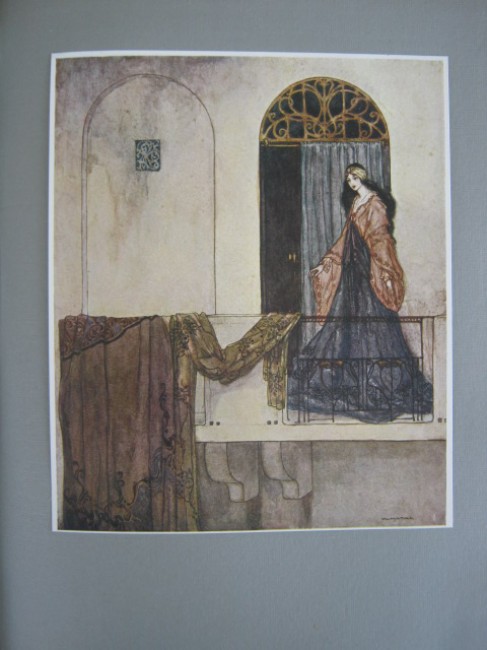 The Ship that Sailed to Mars

The book is quarter-bound in vellum, with gilt lettering and design to the spine, and grey boards, with an embossed black title to the upper panel. In addition to the plain grey card endpapers, the book has 96 grey card leaves, with 48 colour illustrations and 48 text panels pasted to the obverse sides.

The author and artist, William Timlin, was born and had his early art training in England before coming to South Africa in 1908, when he was 20. He spent most of the remaining 31 years of his life in Kimberley, working as an architect (one of his major buildings was Kimberley Boys' High School) and an artist, turning out, according to Wikipedia, a large number of watercolour fantasies in addition to oils, pastels, etchings and illustrations for periodicals.

In 1921 Timlin began his work on "The Ship that Sailed to Mars", as an educational amusement for his young son. Two years later he submitted the pages to a London publisher, George Harrap, who, instead of typesetting the text, published it with the artist's own calligraphy.

In his book on 20th century children's books, Alan Horne described Timlin's "Ship" as "a masterpiece . . . the most original and beautiful children's book of the 1920s".

The internal condition of this 90-year-old copy is much better than average - all panels are bright and clean, there are no ownership or other marks, and only three leaves have small tears - the longest 3 cm. The page-edge gilding has browned. The binding, as is the case with most other copies that have not been rebound, has loosened, but not markedly. The binding has cracked at the back endpaper, but the hinges are unsplit. The boards are worn at all edges and corners. The state of the vellum, shown in the images, is the main reason why the book's overall condition is only Good+: the leather is rubbed and flaked and the spine is sunned, with the top crushed and the foot having a 2 x 2 x 2 cm loss of material.

As well as showing the general condition of the copy now offered, the images include the contents pages of the book's three parts as well as paintings and text panels illustrating and describing the first part - "The Building of the Ship".