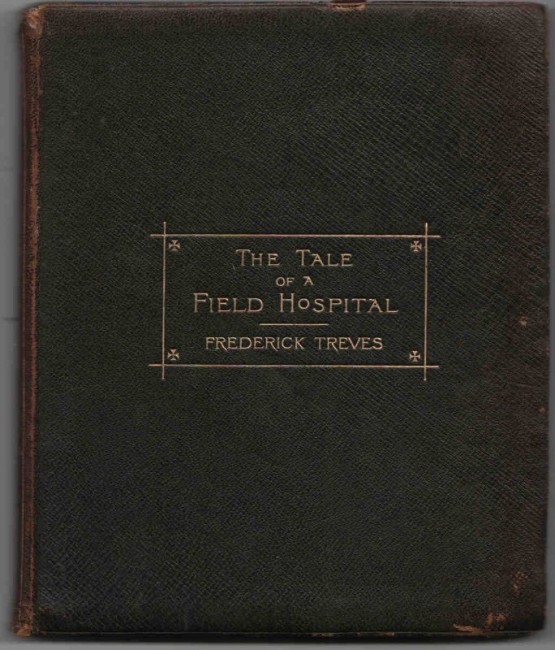 The Tale of a Field Hospital

Email or share
Small 4to (197 x 166 mm); full green morocco over limp boards; lettered in gilt to spine and upper cover; t.e.g.; pp. viii + 109 + publisher\'s catalogue; 14 plates. Extremities somewhat chipped and rubbed, particularly to top third of lower joint; spine sunned; ownership inscription to front free endpaper; endpapers browned; some light foxing. Good. (Hackett p. 192; Mendelssohn II, p. 523) \'The author, one of the most eminent British surgeons of the day, went to Natal during the dark days of Buller\'s campaign in the South African War, 1899-1902, and his account of the sufferings of the wounded is extremely sad. The scope of the volume is confined strictly to a review of work in connection with the hospitals and ambulances, and there is no criticism of political or military matters. The Field Hospital described was known as \"No. 4 Stationary Hospital,\" its name being something of a misnomer, as it moved with the column until the relief of Ladysmith. The first station it occupied was \"Frere,\" where there were about 30,000 troops and here Sir Frederick had an opportunity of seeing the effects of Boer looting. There is a graphic account of the scenes among the wounded after the battle of Colenso, and many touching examples are given of the heroism, unselfishness, and cheerfulness of the wounded British soldiers. Mention is made of the valuable assistance rendered by the \"Volunteer Ambulance Corps,\" which was organised by Colonel Gallwey: this company comprised 2000 men, and the author praises their conduct and services. He seems to have mastered the characteristics of the British privates very rapidly, and he by no means agrees with the title \"absent-minded\", as applied to them by Kipling. Sir Frederick accompanied General Buller on his entry into Ladysmith after the relief, and draws a touching picture of the wretched state of the inhabitants and the town.\' - Mendelssohn.