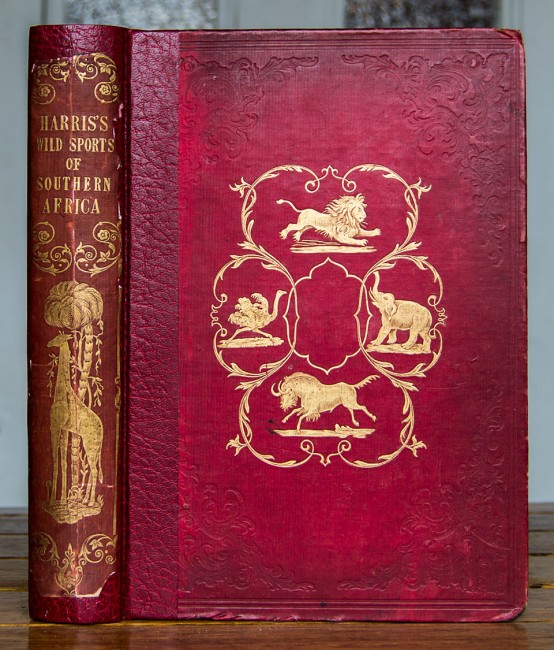 The Wild Sports of Southern Africa

Being the narrative of a hunting expedition from the Cape of Good Hope through the Territories of the Chief Moselekatse, to the Tropic of Capricorn

As well as being an engineer and a famous hunter and traveller, with an almost unrivalled knowledge of natural history, Harris was a fine researcher, interviewer, writer, artist and map-maker and was responsible for the illustrations and maps in his books. He led a charmed, though short, life. He was a captain of engineers on the Bombay establishment of the Honourable East India Company when in 1836 he was medically boarded to the Cape. By July of that year he had fitted out the first of the several expeditions on which his three major and other minor published works were based.

The Wild Sports was one of his major works, being published in various stages of completion from 1838 (Bombay; 1 illustration and 1 map) to 1839 (London; 8 illustrations) 1841, 1844 and 1852 (London, when extra chapters were added, the map was retained and the number of hand-coloured illustrations rose to 26).

Ours is a complete and near very good copy of the sought-after fourth edition of 1844, in the original red cloth-boards, blind embossed and gilt lettered and decorated, with a new matching Skivertex spine and the original red and gilt spine panel laid down. All edges gilt. xvi + 359 pp of text and appendix + 26 inserted colour plates, including the frontispiece and the vignette on the half-title opposite, + a 2-fold coloured map at the back.

CONDITION NOTES. The spine strengthening and new pattered ivory endpapers have restored the binding to tight and square. The bumped corners and light shelf-wear to the cloth have, however not been repaired. The gilt page-edges remain bright. There is a crack between the retained original front free endpaper and the frontispiece verso, but the hinges are not damaged. These 2 leaves are chipped at the foot. For the rest, the contents are complete and unmarked and all 26 coloured engravings and the map are in position and in very good condition. During our collation of the volume, pp 163-74 became detached from the stitches and pp 147-52 became partially detached. There is some occasional light spotting to both text pages and plates but nothing to mar the attractive typography and large margins.