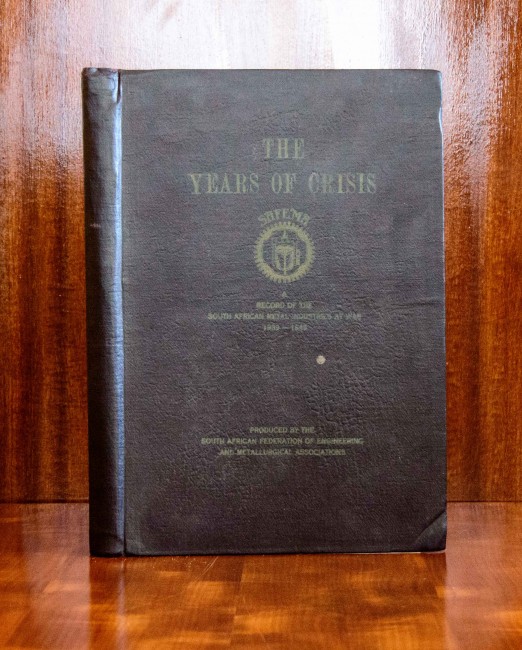 Even today this large folio publication (xvi + 354 pp of text illustrated with many photographs from the Director-General of Supplies and some fifty individual companies) would have challenged printers, paper suppliers and binders, so the credit to "Printing House" (Rostra Printers, Johannesburg) for this production of nearly 70 years ago is well deserved.

Dr van der Bijl, who authored the foreword, was both South Africa's Director-General of Supplies during World War 2 and president of the Federation of Engineering and Metallurgical Associations, the publisher of this book. Smuts's appreciation was written in his capacity as Prime Minister during and after the war.

Heavy black cloth-boards with green lettering and design to the upper panel, plain endpapers, xvi + 354 pp of text illustrated with many photographs from the Director-General of Supplies and some 50 individual companies + 14 blank leaves, all on coated paper.

CONDITION NOTES. The boards are very slightly rubbed at the spine-ends and one of the four corners. The endpapers are lightly foxed, C R Swart's violet stamp is on the front free leaf. A minor crack near the front does not affect the binding. The contents are fine - complete, unmarked and undiscoloured - making this a collectable copy of a proud wartime record (a small part of which is illustrated in the images).