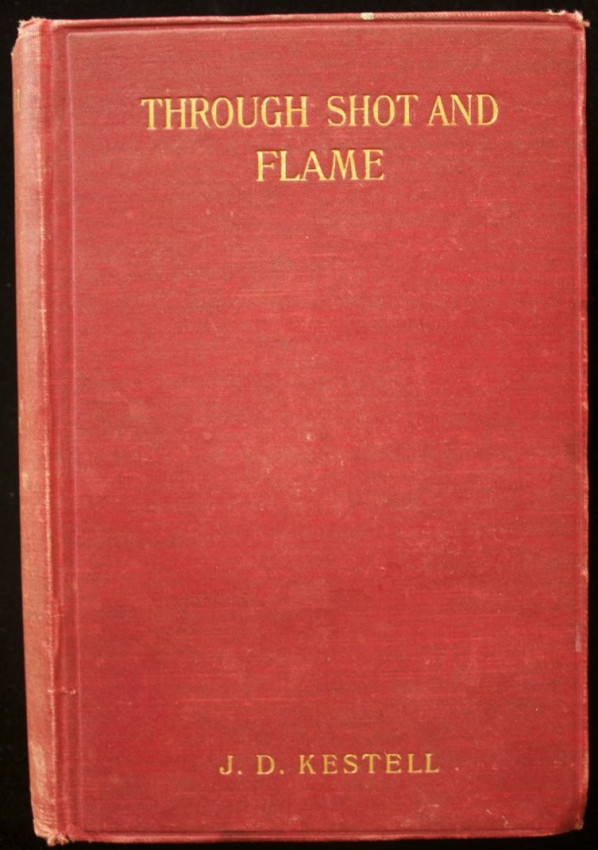 THROUGH SHOT AND FLAME. The Adventures and Experiences of J. D. Kestell, Chaplain to President Steyn and General De Wet (1903)

'The author was the principal minister of the Dutch Reformed Church at Kimberley for many years before he was called to Harrismith, in which town he was stationed at the outbreak of hostilities. He relates in his Preface that his wife, solicitous for his personal safety, burnt the first part of the MS. of this work, and that at his capture at Graspan, near Reitz, he lost a third part of his notes. These occurrences, however, have not prevented him from writing an interesting account of his experiences during the war, throughout which he acted as Chaplain to the Republican forces of the Free State, and the work, though tinged with great hostility to the British, does not fail at times to be critical of the actions and conduct of the Republican forces. With regard to the Boer looting in Natal, he maintains that "the Boers destroyed the houses of those only who had fled from their farms, and had thus shown that they were hostile to us," and that the British were extreme in their reprisals. The burning of farms by the latter, and the conduct of their troops to the Boer women and children, is bitterly commented on, and there is severe condemnation of the cruelties said to have been perpetrated during the campaign. On the other hand, the Burghers are often censured for endeavouring to evade fighting, making excuses to get back to their farms, and surrendering too easily to the enemy. The writer remarks that after the battle of Colenso, Villebois, the French General, said to him, "General Botha is a true general," and in describing De Wet it is asserted that, "while he was friendly to all, he was intimate with none"...and "as reticent as the Sphinx." Strong reprobation is expressed for the tactics of Lord Kitchener in endeavouring to get the Boers to surrender, and for the conduct of General Piet De Wet and his followers. Mr. Kestell was appointed acting secretary to the Free State Executive Council at the time of the Peace negotiations, and as such attended "the meeting of the Representatives of the People at Vereeniging." He describes the last scene of "The Bitter End," culminating in the signing of Peace at Pretoria, and ends by asserting, "although we are now under the British Empire, and as subjects of that Empire will bear ourselves peaceably, yet our own nationality will ever be something great and sacred to us." - Mendelssohn Vol.I, page 814