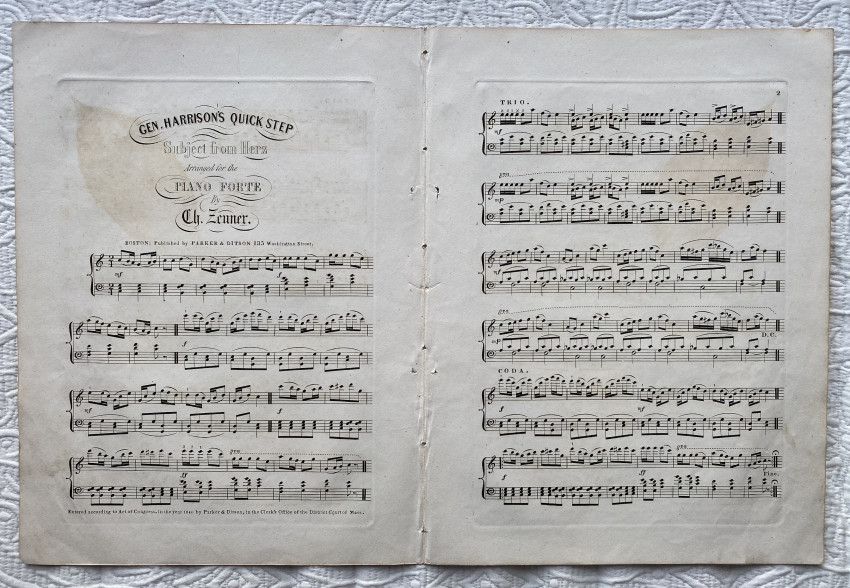 Three pieces of engraved sheet music that were part of the Whig 1840 U.S. presidential campaign, including ‘Tip and Ty’ the song which provided a number of political catch-phrases: most famously ‘Tippacanoe and Tyler too’. Very rare on the market.

[Alexander Coffman ROSS (1812-1883, lyricist)]. Title: Tip and Ty : a new comic Whig glee, dedicated to the Louisiana Whig delegation to the Bunker Hill convention. New York: Parker & Ditson, [no date but 1840?]. Folio (13 ¼ x 10 inches). 2 leaves which used to be a bi-folium. Engraved title, music and lyrics, printed on the verso of the first leaf and the recto of the second. (The bi-folium now two leaves, some small tears, some small voids to inner blank margins, some spotting to extremities).  The engraved words and music which featured prominently in the hard-fought Van Buren versus William Henry Harrison presidential campaign of 1840.

[ANON.] Title: In Days of Old a favorite patriotic ballad, as sung at the Tippecanoe Associations, with great applause, partly written and arranged, for the piano forte, by a member of the Fifth Ward Club. [No place but New York: no date but 1840?]. Folio (13 ¼ x 10 inches). Bi-folium, 3pp . engraved title and  music, printed on the recto and verso of the first leaf and the recto only of the second. (Some spotting, removed from an album).  A nice example: words and music as political propaganda. The song recalls Harrison’s leading part in the battle of Tippecanoe in November 1811: an event which cemented his reputation as an American hero, a key factor in the 1840 election.

Charles ZEUNER (1795-1857). Title: Gen. Harrison’s Quick Step subject from Herz arranged for the piano forte by Ch. Zeuner. New York: Parker & Ditson, [1840]. Folio (13 ¼ x 10 inches). Bifolium, 2pp of engraved title and music, printed on the verso of the first leaf and the recto of the second. (Some small tears, some small voids to inner blank margins, some spotting to extremities, removed from an album).  A nice example: unlike the other pieces in this collection, this piece does not include any lyrics. The title is sufficient to remind listeners of Harrison’s glorious martial past.

“It was going to be a tight Presidential Election in 1840. William Henry Harrison was running against incumbent, Martin Van Buren. Harrison used innovative techniques that foreshadowed modern campaign tactics.

His supporters went visual and big. They made a huge ball, about ten feet tall, loaded it up with campaign slogans, and physically rolled it from town-to-town. This is the origin of the phrase ‘Keep the Ball Rolling’. Some of the slogans on this ball were ‘Fare well Dear Van, not the man’, referring to opponent Martin Van Buren. Or ‘To Guide the ship, Old Tip’, referring to Harrison and his famous victory at Tippecanoe.

They had a song with a memorable tagline ‘Tippecanoe and Tyler Too’ [the present work]. The song itself is forgotten, but not the famous slogan.

His opponent’s campaign fought back. They tried to exploit his age. At 67, he was the oldest candidate to-date. His opponents said Harrison was an old man who would be content to sit in his log cabin and drink hard cider. This backfired. Harrison’s campaigned embraced these descriptions. The campaign used the log cabin image to support Harrison as a common humble man versus the aristocratic Van Buren. Somewhat fake news, as Harrison was born into a well-off family in Virginia while Van Buren came from a poor family in upstate New York .”

An important, rare early work from Nathaniel Currier, one half of Currier & Ives: most surviving impressions of "The Cracovienne" have been detached from the accompanying sheet music. This original Nathaniel Currier impression, however, is complete with the engraved musical score. It is printed upon white wove paper and with full margins as published in New York between about 1840 and 1842. It bears the printed signature, "N. Currier’s Lith. NY", within the image to the lower right.

“Between 1840 and 1842 [Fanny] Elssler toured the United States, winning extravagant adulation and earning enormous sums. She had broken her contract with the Paris Opéra in order to extend her American tour and could not return there, but she danced with continuing success in England, Germany, Italy, and Russia until her retirement in 1851.” (Britannica.com/biography/ Fanny-Elssler).

Frederic A. Conningham Currier & Ives Prints: An Illustrated Check List. New York, Crown Publishers, 1983. #1289 (first edition: the author notes that a second edition was published, with alterations in the background to the village and houses.)

The first commercially successful song written by an American woman

Title: The Blue Juniata, words & melody by … Sullivan, arranged for the piano by E.L. White.

A first or early issue: NB.“Music historians consider the ballad the first commercially successful song written by an American woman, so popular by the 1860s, that it was sung by soldiers on both sides during the Civil War. The lyrics tell a romantic tale of an American Indian girl, ‘Bright Alfarata,’ and her love, a gentle yet courageous Indian warrior. The song is set along the wild Juniata River of old, based, according to Mrs. Sullivan, upon her vivid recollections of the river valley.”

The Charming Woman, Words and Music by Mrs. Price Blackwood. Boston: published by Parker & Ditson, [1840]. Folio (13 ¼ x 10 inches). A bi-folium, with 3pp on the 2 leaves. Engraved throughout, title, music and lyrics, printed on recto and verso of the first leaf, and recto only of the second leaf. New York retail stamp at foot of first page.  (Removed from an album, occasional very light spotting).

The engraved words and music –  with heavy sarcasm the author points out the attributes of a ‘charming woman’ = an educated woman / blue-stocking, finishing with a warning that a ‘sensible’ young man should avoid marrying a ‘charming woman’. The final irony: the author was herself a ‘charming’ woman (according to her own criteria).  Helen Selina Blackwood, Baroness Dufferin and Claneboye (née Sheridan, 18 January 1807 – 13 June 1867), later Countess of Gifford, was an Irish songwriter, composer, poet, and author. Admired for her wit and literary talents, she was a well-known figure in London society of the mid-19th century.