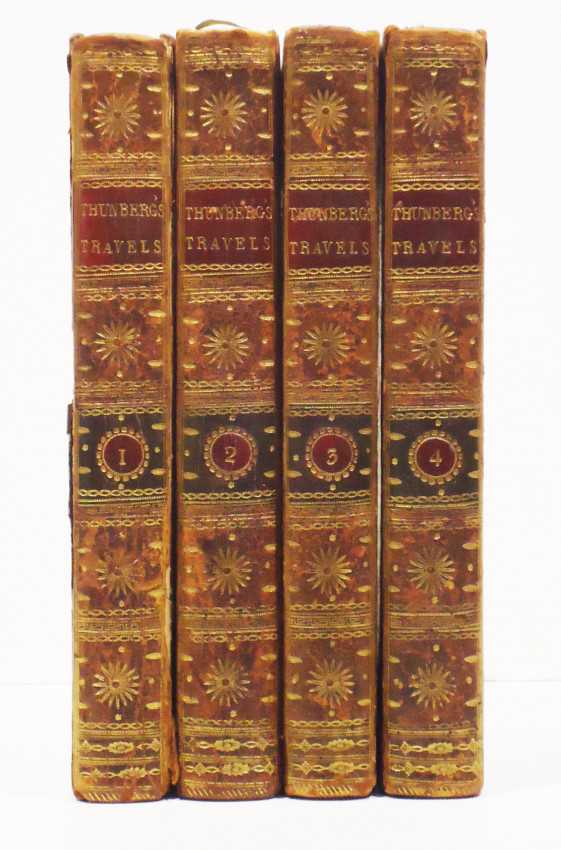 Second edition with volume IV: 4 volumes, I. 317, [xviii index]; II. [xiv], 316; [xvi index], III. xiii, 285, [xv index], 31 vocabulary of the Japanese language, [i] errata; IV. xix, 293, [xvi index], [i] publisher's advertisement; pages, 11 plates including: engraved frontispiece in volume I and 2 other plates – 1 folding (Arms and Implements of the Hottentots), 4 plates in both volumes 2 & 4 each with a one-leaf explanation of the plates, contemporary mottled calf with decorative gilt and red title labels gilt on the spines, ownership crest on the front paste down end paper in each volume, a very good set.

Mendelssohn (Sidney) South African Bibliography, volume 2, page 500, 'The greater part of the first volume and about half the second are devoted to Thunberg's experiences in South Africa, his botanical notes being of special value. Later on he visited Japan, Ceylon and other places........'

A South African Bibliography, volume 4, page 505, ‘Volume IV was published in the same year as the second edition of vol. I-III and is found both with the first and with the second edition as vol.IV of the set. According to Prof. V.S. Forbes the translator of Thunberg Travels was Charles Rivington Hopson.

NARRATIVE OF AN EXPLORATORY TOUR

Lectures and Commentaries Upon Biblical and Talmudic Passages

Carbineer. The history of the Royal Natal Carbineers