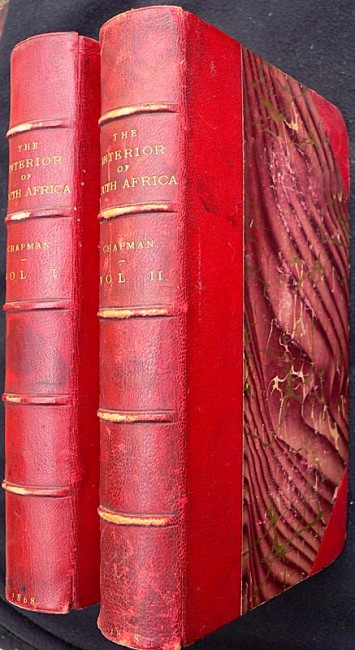 Vol. 1 consists of 454 pages with a linen fold-out map. Numerous illustrations throughout. Light foxing in places and tanning towards the edges of the pages throughout. Page 1 is loose at the spine, next to the map. Half leather rebound with ribbed spine and marbled front and back boards and end-papers. Boards and leather are scuffed in places and corners are bumped. Bindery is nice and tight. Top of text-block is gilt edged. Gilt title on spine. Overall condition is good!

Vol. 2 consists of 480 pages with a paper fold-out map. End flap of map has become detached on fold, but is present. Numerous illustrations throughout. Light foxing in places and tanning towards the edges of the pages throughout. Half leather rebound with ribbed spine and marbled front and back boards and end-papers. Boards and leather are scuffed in places and corners are bumped. Bindery is nice and tight. Top of text-block is gilt edged. Gilt title on spine. Overall condition is good!

A son of James Chapman and Elizabeth Greeff of Malmesbury and brother to Henry Samuel Chapman, he was educated in Cape Town and left for Durban when 14 years old. He was appointed as chief clerk in the Native Affairs Department in 1848. A year later he settled in Potchefstroom where he became one of the first storekeepers. Shortly after, in 1852, he ventured across the Limpopo River and into Bamangwato country. He became friendly with Khama, one of the sons of Sekgoma, the Bamangwato chief, enlisting his aid in reaching the Chobe River. Early the following year found him on the Zambesi River which he explored to within 70 miles (110 km) of the Victoria Falls, almost beating David Livingstone to their discovery.

By 1854 he had teamed up with Samuel H. Edwards, another explorer, and launched an expedition to Lake Ngami after which he trekked through the territory between Northern Bechuanaland and the Zambesi. An easygoing man, he was able to get on with the Bushman hunters of the semi-desert interior and spent long periods in their company, obtaining valuable help from them. Returning to Ngami, he travelled north to the Okavango River, crossing Damaraland and reaching Walvis Bay. Here he busied himself with cattle-trading in Damaraland, before setting out on an expedition with his brother Henry and Thomas Baines and lasting from December 1860 to September 1864. Their aim was to explore the Zambesi from the Victoria Falls down to its delta, with a view to testing its navigability. However, these plans were bedevilled by sickness and misfortune. They did reach the Zambesi, but did not get to explore the mouth. On 23 July 1862 they reached the Victoria Falls. It was on this expedition that Baines painted many of his famous scenes which were reproduced in an album of prints. His attempt at exploring the Zambesi ruined his health and exhausted his finances. He returned to Cape Town in 1864, dispirited and fever-stricken. The expedition was notable since it was the first time that a stereoscopic camera had been used to record its progress. The size of the negatives was about 6 x 4.5 inches and of rather poor quality. Prints of these photographs are at the Africana Museum in Johannesburg.

Sir George Grey commissioned him to capture live animals and to compile glossaries of the Bantu languages. Chapman kept diaries throughout his journeys, but his Travels in the Interior of South Africa appeared only in 1868, shortly before his death. Chapman travelled at times with Francis Galton and C.J. Andersson. He attempted to farm at Anawood on the banks of the Swakop river in 1863 and 1864, but was forced to abandon his holding due to the Nama-Ovaherero War, in which he refused to become involved. From 1864 until 1870 he lived at various places in South Africa, but returned as a trader and hunter to Hereroland and Ovamboland between 1870 and 1871. He died at Du Toit\'s Pan near Kimberley, on 4 February 1872, aged 40 years.