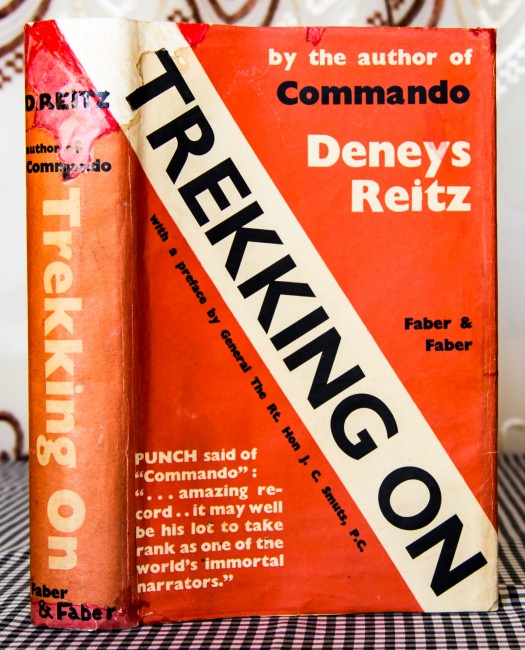 The unclipped two-colour typographic dustjacket (price 15s net) has a minor repair at the foot of the spine and is now protected in clear plastic.The back flap has four small chips.

The green cloth-boards are lightly rubbed at the spine ends. The binding is tight. The plain endpapers and the contents - 351 pp of text and index + 5 inserted fold-out maps - are unmarked. The endpapers and first few and last few leaves are lightly foxed.

This was the second of Reitz's three autobiographical volumes (Commando being the first), all with prefaces by Smuts, his chief, who, with his wife Isie, famously restored Reitz's physical and mental health at Doornkloof, Irene, after Reitz had returned from three years' self-imposed exile on Madagascar at the end of the Anglo-Boer War.

Reitz was himself a towering author, politician and diplomat, as well as soldier. Much of the present volume refers to Reitz's first world war years, which, despite his one-time bitter opposition to the victors of the Anglo-Boer War, he ended in command of the 1st Batallion of the Royal Scots Fusiliers.

From the blurb: "Trekking On begins in Madagascar. Then the scene shifts to Pretoria, where Botha and Smuts proved to the young man that Dutch and English must bury past quarrels and build a united South Africa . . .  the years passed quickly till 1914, when adventures again began. The first of these was the Civil War in the Union . . . Then came the campaigns in 'German West' and 'German East'. In all these Reitz played an active and thrilling part [before sailing for Europe]."