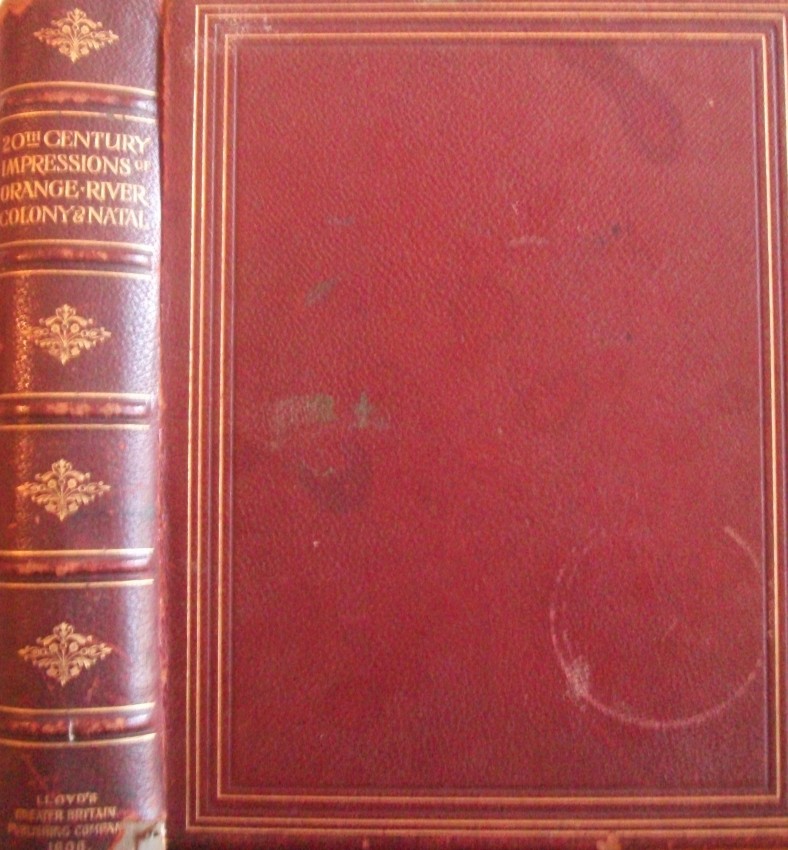 Reginald Lloyd was a grandson of the highly successful London publisher Edward Lloyd (1815-1890), who plagiarised Dickens and whose Lloyd's Weekly was the first English publication to sell a million copies [Wikipedia].

The first publication of Lloyd's Greater London Publishing Company was the present volume. The company's raison d'etre was to describe, present and illustrate places, public bodies and individuals in various of Britain's former colonies or areas of influence.

The Orange River Colony (the lesser part) and Natal (the greater part) were covered in the present volume, which appeared in 1906. Subsequent volumes [see Wikipedia] covered Ceylon (1910), Argentina (1911) and the West Indies (1914).

This first volume was originated, printed and bound by the English printers Unwin Brothers at their Gresham Press plants in Woking and London.

DESCRIPTION. The volume is full bound in maroon calf-boards with the upper panel blind embossed and gilt ruled, the lower panel blind embossed ruled, and the spine with five raised bands and gilt lettering and decoration. The head- and tail-bands are gold and red. The endpapers are maroon and brown marbled paper with maroon binding tape at the centre. All page-edges are gilt. The contents comprise Orange River Colony (120 pp) and Natal (668 pp) = 880 pp of text and index with gilt-decorated title-pages and profusely illustrated with maps, tables, half-tone plates of people and places, and line decorations - all on heavy white glazed paper.

CONDITION. The spine and endpapers have been strengthened and the book has been pressed. The corners, however, remain bumped and there are some light marks on the faces. The gilt lettering, design and rules on the boards and spine and the page-edge gilding remain bright. The endpapers are fine, with no ownership or other markings. The versos of the front and back free endpapers and the adjacent leaves are lightly sunned. The contents are complete, with the text and illustrations bright, clean and undiscoloured; and with only a very occasional brown mark or small unclosed tear (see the images for Orange River Colony p 79 and Natal pp 15/16).