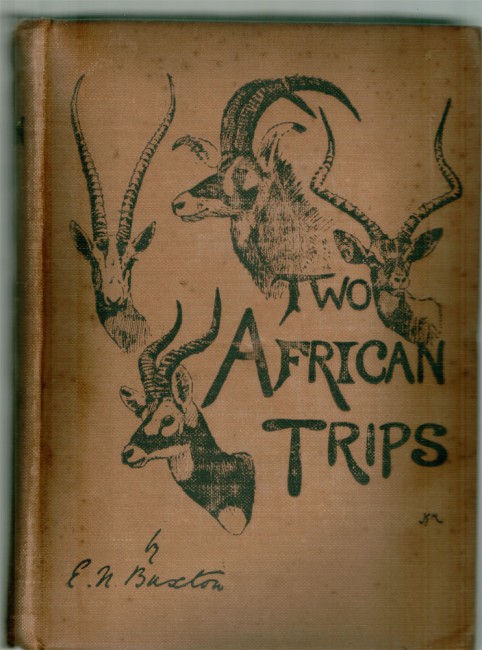 Buxton (E.N.). Two African Trips with Notes and Suggestions on Big Game Preservation in Africa. With illustrations and map. Edward Stanford, London, 1902.
8vo.,First Edition, xi,209pp., with numerous photographic illustrations and folding map in pocket; decorated buckram with heads of game on the upper cover and that of lion on the lower cover (somewhat faded as usual, top of spine a little rubbed and damaged, internally good).
Presentation Copy with the following inscription on half title in ink: “Maj Genl Sir R Wingate KCB, Sirdar of the Egyptian Army with the Author’s Compliments, Oct 1902”. The volume also bears the bookplate of Sir Reginald on the inside cover. Hosk p.35. Czech p.30

Together with:
Tipped in with the folding map at rear is an envelope with the insignia of the Grand Continental Hotel Cairo. On this the following has been written on pencil: “H.E. Sudan. After getting yr note last night, which I herewith return, I read Buxton’s Book and roughed out these notes, which I thought you might like to see before I go to Lord Cromer. I think they tend to show at any rate that you have not allowed the bone of contention, the closed districts, to be overrun by Brit Officers or officials to the prejudice of the British Public, (the signature is difficult to decipher), Cairo 24.11.02.”

Inside the envelope are eight numbered pages of manuscript notes, on the same hotel’s headed paper. These notes appear to refer to the movements of hunters and surveyors in the Sudan, the right to shoot game, The White Nile Reserve, and make reference to Buxton’s book.

The identity of the author of the manuscript material that accompanies lot no 21, Buxton (E.N.), Two African Trips with Notes and Suggestions on Big Game Preservation in Africa, London 1902 is H H S Morant, an officer in the Durham Light Infantry and (one presumes) on Lord Cromer’s staff in Egypt at this time as Assistant Director of Intelligence.

He is mentioned in the Preface, written by Sir Reginald Wingate, to Lieut. Colonel Count Gleichen, The Anglo-Egyptian Sudan, A Compendium Prepared by Offices of the Sudan Government, 2 vols., HMSO, 1905.