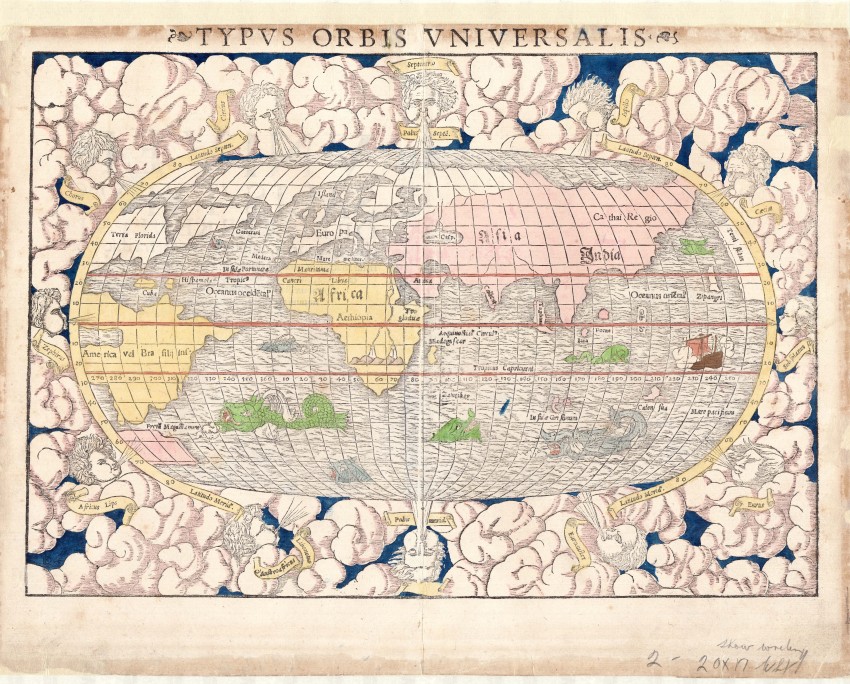 Today, this is one of the earliest obtainable world maps. It is the best known of the 16th century maps of the world and is notable for its depiction of geography understood at the time.

This example of the map was published some time from 1550 (1550 - 1578) by Sebastian Münster's son-in-law, Heinrich Petri, in Münster's Cosmographia, a geography after Ptolemy;  Muster died of the bubonic plague in 1552.  The first edition of this map first was printed in 1542, but from a different woodblock. This map, the second edition, was printed from the second woodblock cut by David Kandel, whose initials can be seen on the bottom left blue coloured area.

The Cosmographia (in 6 volumes) was one of the most successful and popular books of the 16th century; there were 24 editions in 100 years, first in German (translated from the Greek), then Latin, English, French, Italian and Czech.

This world map, with both latitude and longitude scales, is based on information from the latest explorations of Verrazano and Cartier. Africa is quite accurately depicted and consists of the regions of Mauritania, Libya, Æthiopia and, at the horn of the continent, the land of the Troglodæ (cave dwellers). Two lakes that arise from the Mountains of the Moon are the source of the Nile. This is the first map to name the Pacific Ocean: Mare Pacificum. North America (Terra Florida) and South America (Brasilij Inf.) are rudimentary in form and Central America is absent. Terra Australis is much smaller than on later maps and is located South of South America, creating the Fretu Magaliani (Strait of Magellan). The depiction of south-east Asia clearly reflects the lack of knowledge of the region in Europe at that time. The map is also decorated with sea monsters and twelve named wind-heads.

The map has later colouring. Some small areas of foxing and 'acid creep' remain after professional restoration. The upper margin has been reversibly extended by adding a strip of archival tissue paper in order to enable easy framing.