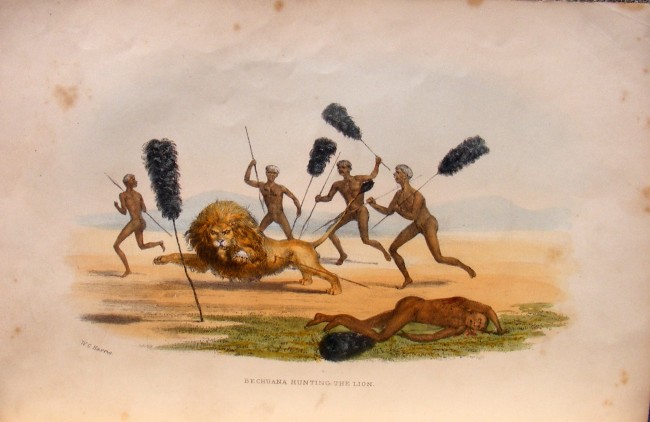 Fourth edition, 1844, The Wild Sports of Southern Africa, being the narrative of an expedition from the Cape of Good Hope, through the territories of the Chief Moselekatse, to the tropic of Capricorn, previous owner's name on inside blank page, 26 colour plates, map, 360pages, condition:very good.

Captain William Cornwallis Harris was in the British East India Company , Engineers, Bombay Establishment, and was medically boarded to the Cape in 1836. He decided to undertake a well -equipped hunting expedition and left Algoa Bay for the interior in July 1836. With information from Robert Moffat at Kuruman , he entered Mzilikazi’s territory and once there hunted every kind of game. From the book,’ "herds of quaggas and brindled gnoos estimated to contain 15 000 animals . . . the country being chequered black and white with their congregated masses ( The first sentence in his book is, ‘ From my boyhood upwards, I have been taxed by the factious with shooting-madness, and truly a most delightful mania I have ever found it). Not only a hunter, as an engineer he took an intensive interest in the fauna and produced watercolours and made thorough scientific studies, recording incidents ,details of peoples and descriptive reliefs, leavened by his wry humour. Harris’s Book was originally published in Bombay in 1838 under the title: Narrative of an expedition from the Cape of Good Hope to the Tropic of Capricorn in the years 1836-37. The second edition appeared under the title : The Wild Sports of Southern Africa (1839). This edition contained 7 plates.

The third and fourth editions (1844) include additional material and have 26 coloured lithographs, after Harris, including the vignette title and a map.

Also folios of the images, in five parts, were offered from 1838. These paintings were stated to have been made on a scale of one and a half inches to one foot from ’repeated measurements’ of the animals themselves. When the individual subscriber or purchaser had received all the parts, he had them bound to his own taste. Mendelssohn called these folios,’one of the most important and valuable of the ….works on South African fauna.

This book is a book of firsts and has been in continuous reprint since the Struik facsimile edition of 1967.Harris discovered the sable antelope and was the first to describe the wild buck. His descriptions of the Boer Trekkers, his visit coincided with the early days of the Great Trek, can be regarded as the first attempt to record the story of the Trekkers and their initial conflict with indigenous people. ’

This octavo volume, the fourth edition of 1844, contains the 24 colour plates, the vignette on the title page and the frontispiece of Moselekatze, King of the Amazooloo.

African Ark. Peoples of the Horn