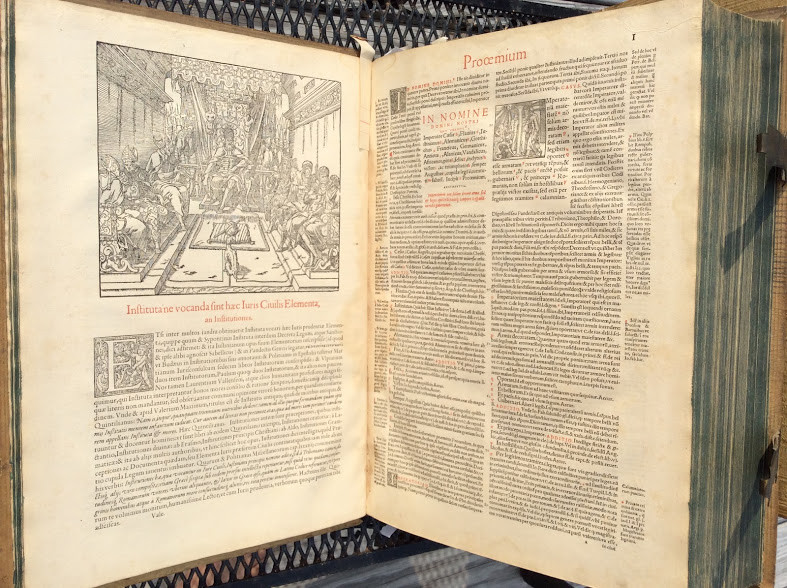 The majority of a set of 6 volumes containing the 'Corpus juris civilis', published originally by La Porte from 1551-1553. The work as a whole is generally seen as the foundation of the Western legal tradition.

The matching contemporary bindings on this part set make it particularly unusual.

"The Corpus Juris (or Iuris) Civilis ("Body of Civil Law") is the modern name for a collection of fundamental works in juriasprudence, issued from 529 to 534 by order of Justinian I, Eastern Roman Emperor. It is also sometimes referred to as the Code of Justinian, although this name belongs more properly to the part titled Codex Justinianus.The work as planned had three parts: the Code (Codex) is a compilation, by selection and extraction, of imperial enactments to date; the Digest or Pandects (the Latin title contains both Digesta and Pandectae) is an encyclopedia composed of mostly brief extracts from the writings of Roman jurists; and the Institutes (Institutiones) is a student textbook, mainly introducing the Code, although it has important conceptual elements that are less developed in the Code or the Digest. All three parts, even the textbook, were given force of law. They were intended to be, together, the sole source of law; reference to any other source, including the original texts from which the Code and the Digest had been taken, was forbidden. Nonetheless, Justinian found himself having to enact further laws and today these are counted as a fourth part of the Corpus, the Novellae Constitutiones (... literally New Laws).

The work was directed by Tribonian, an official in Justinian's court. His team was authorized to edit what they included. How far they made amendments is not recorded and, in the main, cannot be known because most of the originals have not survived. The text was composed and distributed almost entirely in Latin, which was still the official language of the government of the Byzantine Empire in 529–534, ...

How far the Corpus Juris Civilis or any of its parts was effective, whether in the east or (with reconquest) in the west, is unknown. However, it was not in general use during the Early Middle Ages. After the Early Middle Ages, interest in it revived. It was "received" or imitated as private law and its public law content was quarried for arguments by both secular and ecclesiastical authorities. This revived Roman law, in turn, became the foundation of law in all civil law jurisdictions. ... Its influence on common law legal systems has been much smaller, although some basic concepts from the Corpus have survived through Norman Law - such as the contrast, especially in the Institutes, between "law" (statute) and custom. The Corpus continues to have a major influence on public international law. Its four parts thus constitute the foundation documents of the Western legal tradition." (wikipedia). (3).

The Trial of Sir Archibald Gordon Kinloch, of Gilmerton, Bart: For the Murder of Sir Francis&hellip;